Romeo and Juliet Berkshire Bound February 12 at the Colonial 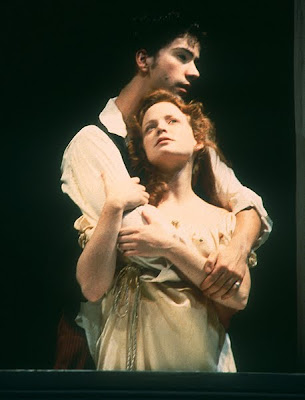 Hamish Linklater and Heather Robison in The Acting Company's production of Romeo and Juliet at the Colonial February 12. Photo by Susan Johnson.
The Acting Company, a highly praised American touring repertory company and the renowned Guthrie Theater proudly present Romeo & Juliet. It's been some time since we saw a professional production of this masterpiece in the Berkshires. Young love has never been so delightful, or as dangerous, as in this stirring, full-length production.

Since its founding in 1972 by the legendary John Houseman and Margot Harley, The Acting Company has performed 133 productions touring to 48 states and ten foreign countries. Slated for Friday, February 12 at 8 PM, tickets are $45 and $25 and can be purchased in person at the Colonial Ticket Office at 111 South Street Monday-Friday 10AM-5PM, performance Saturdays 10AM-2PM, by calling (413) 997-4444 or online at www.TheColonialTheatre.org

There will also be a performance at 9:30AM for students as part of the Performing Arts for Schools Education Program.
Posted by Larry Murray at 7:13 PM