"Cabaret" at the Colonial Theatre Gets the Basics Right 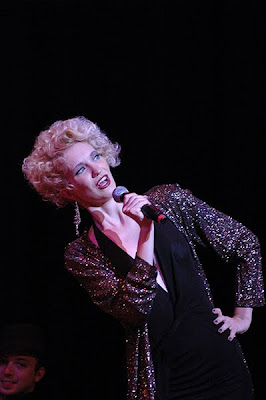 Oakley Boycott - an ascending Broadway star to watch.
The temperature barely rose above the zero mark this past Saturday, but inside the Colonial Theatre in Pittsfield, it was hot, even torrid, on stage as the famous musical, Cabaret, was brought to life once again. The famous Kander-Ebb work is evergreen, audiences never seem to tire of it. Though only in the Berkshires for the day, with a matinee and evening performance, this was no bare pipe production.

Windwood Productions, which specializes in what are called "bus and truck" shows threw up a wonderful set to recreate the Kit Kat Klub, and had a full complement of stage lighting and sound that made it feel that this was a show that was settling in for a long run. And they filled the Colonial stage with a cast of two dozen plus an eight piece band that moved on a platform from backstage to front at several points in the show.

As the Emcee, Zac Mordechai skipped the usual heavy makeup and went for a more naturalistic look and his performance was not as over the top as many I have seen. Perhaps more suitable for conservative rural audiences, but I think the lack of zing is one reason the matinee audience seemed to sit on its hands.

Oakley Boycott as Sally Bowles delivered a very workmanlike performance, finding the sweet spot between Sally's impulsive nature and her humanity. This was no spoiled brat, but rather a frightened young woman who sought the shelter of friends and lovers rather than independence. It seemed that she and the company hit their stride in Act Two, where we saw flashes of a real talent at work. Her rendition of the title song was very touching. Given more seasoning and a maturing of her vocal and movement skills, she's on her way to becoming a Broadway triple threat.

The brief fight scene was very well choreographed, even if the dance numbers themselves needed more polish. The difference between a good performance and a great performance is attention to detail, and only directors and choreographers with sufficient rehearsal time can reach the stars.

Most of you probably missed this show. Admittedly, the publicity focused far too much on the Broadway and Hollywood versions, and gave precious little detail as to the Windwood production. In fact, it was not even clear if there would be live music, and casting information and good photographs were virtually nonexistent. This is the fault of the producers, not the Colonial. Some good photos of that Kit Kat Klub set with the large band and cast prominently visible would have gone a long way to helping potential ticket buyers know what their dollars were buying. Most theatre-goers I know are still watching their dollars, and you have to work extra hard to convince them to part with them.

Nevertheless, in the quiet off-season the Colonial, Mahaiwe and Mass MoCA all do us proud by finding and presenting theatrical attractions to keep theatre alive when the lakes freeze and life moves indoors. This coming weekend will see a staged reading of ART at the Clark, and the opening of Les Liaisons Dangereuses at Shakespeare and Company. There is even a much anticipated premiere of The Waypoint from the Berkshire Fringe at Mass MoCA on February 6. Then on February 12, the Acting Company-Guthrie Theatre production of Romeo and Juliet brings theatre to the Colonial again.

Also worth noting, is Frank LaFrazio in Living With It coming to the Mahaiwe Performing Arts Center on March 13.

Many of our area community and resident theatres are hard at work keeping theatre seats warm and their stages full as well. Check out Gail Sez for a complete calendar.
Posted by Larry Murray at 1:36 PM