"Please turn off your cellphones..."

It all started in 1999 when Brian Dennehy, performing in Death of a Salesman couldn't bear the chirping phone. "Please, just answer it," he pleaded. And it has gotten progressively worse. You would think that people might have learned to turn them off upon reaching the theatre. Without reminders. 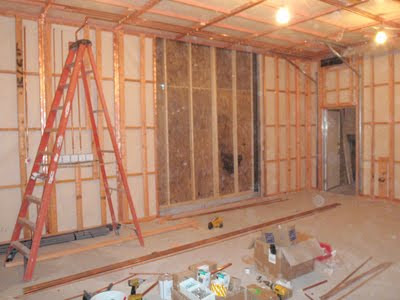 A Faraday Cage under construction which prevents unwanted electo-magnetic signals and lightning from interfering with a theatre's electronics equipment. Oh, and it blocks cellphone signals, too.
But despite having paid $50 or more for a ticket, no more than halfway through the first half comes a ring of a cellphone, or the glow and tapping of a texter a few seats from you. What to do.

Just about every theatre makes a pre-show announcement, which like pre-takeoff instructions from the stewardness are pretty roundly ignored. Fortunately here in the Berkshires, we have considerate audiences so that this is not a common problem. But it does happen. So what to do. In cinemas, this particular filmed announcement has been know to make its point with humor:

So what can be done, you ask? Some patrons have taken to buying cellphone jammers which run on batteries and will pretty quickly foul up incoming signals for up to 200'. Jammers are illegal, but blockers are not.

The simplest (and legal) one is called a Faraday cage, which is simply a copper mesh cage around the auditorium. Its primary purpose is lightning protection or to prevent unwanted electrical impulses from impeding a hospital's MRI equipment.

While there are some FCC regulations about jamming signals, if it is the design of the building itself which blocks, but does not jam signals, it is allowed. It has been rumored for some time that some Broadway theatres have retrofitted them. A friend at IATSE tells me the justification is based on the complex electronics used to run many high tech performances today, especially those that use radio control frequencies to manage stage effects. There had also been problems with unwanted outside crosstalk being picked up by wireless remote microphones.

The Cellular Telecommunications and Internet Association — a Washington-based cell phone lobby that is also known as CTIA-the Wireless Association — said it would fight any move to block cell phone signals. But the person who spends money on tickets for a show has rights to the peaceful enjoyment of their purchase too. It is a good foundation for a defense against the selfish short-sighted businesses that profit from their products disrupting our activities.

Of course, I would post a notice prominently that stated that the theatre does not have good cell phone reception due to the building's design to cover any legal issues.

The ticket buyer could then make an informed decision about which was more important, spending a couple of hours immersed in a great show, or opting out so they are able to take every inane call that comes their way. They can not be allowed to have it both ways.

The cellphone trade group is, of course, completely against forcing people to stop using their cellphones, but the audience has a right to enjoy the show, too.
Posted by Larry Murray at 5:50 PM