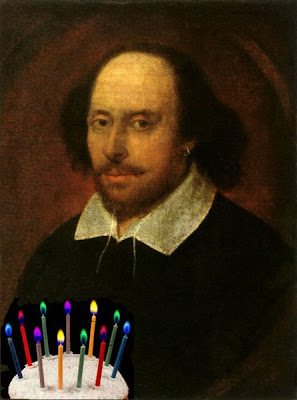 Birthday Bashes for the Bard. (Birthday photo by Larry Murray)

Just a week to go before William Shakespeare is turning the big 445, and theatre companies around the world mark the date with parties and celebrations for the best known writer in the English world. We wrote earlier about the bash at Berkshire Theatre Festival but of course, Shakespeare & Company is also throwing a birthday bash worthy of the occasion. Their Will 445 Bash will rock the Elayne P. Bernstein Theatre, along with its lobby and terrace, on April 23 from 7pm to midnight.

Their invitation warns us:

This being Shakespeare & Company, a swordfight is not out of the question. Guests must leave daggers, poisons and treachery at the door. (Mild knavery is permitted.)

Popular favorites Berkshire Bateria will provide the soundtrack for much dancing and merriment. There will be delicious food and birthday cake for all, plus a cash bar. Music is also provided by cast members of last year’s lively production of All’s Well That Ends Well, and partygoers are welcome to bring their own instruments for an end-of-night jam. Lots of surprises await, including tastes of Shakespeare and an advance preview of some of the exciting new plays coming in the 2009-2010 season.

A roster of tremendous raffle prizes includes tickets to see U2 perform at Giants Stadium followed by a stay at the Four Seasons in New York City, two days of rest and regeneration at Kripalu, an in-Berkshire getaway including tickets to Shakespeare & Company’s fall production of Hound of the Baskervilles or winter production of Les Liasons Dangereuses.

I remember back in high school, my term paper was about Shakespeare! Haha!