Bluegrass Music with a Terrific Twist 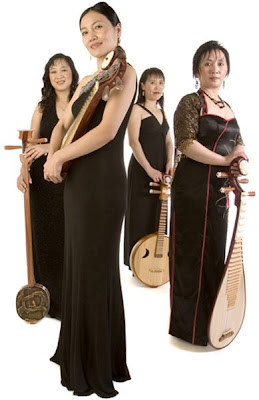 Nothing drives tension away and gets me smiling like some good old fashioned Bluegrass, honest and true American art. So when I heard about the Jaybirds teaming up with Red Chamber, a Chinese quartet using instruments from the far east, my curiosity was aroused. You can hear the unusual and thrilling results on the YouTube video below.


The Chinese lluqin, pipa, sanxian and ruan join the Jaybird's mandolin, bass, guitar and banjo to wonderful effect. The players seem to be having a good time too. The octet plays a wonderful version of Katy Hill and it is shows us how two very different worlds can share things - like music - in common. My thanks to the Berkshire's own Nancy Jane Fitzpatrick for tipping me off to this!

John Reischman and the Jaybirds have a a great website and lots of music to sample.

In my visits to China, I became familiar with the traditional plucked instrument repertoire, often performed in old theatres that were more like refrigerators than concert halls. I could only gaze in amazement at how the instrumentalists worked through such conditions, and managed to keep their strings in tune.

Red Chamber has their own glorious website with lots of sampling opportunities, and a CD if you are so inclined to expand your collection of interesting music. As to the YouTube video above, think about this: in China they will never get to hear or see it. YouTube is so open and free, they don't dare allow its content to be accessed in that nation of 1.3 billion people. Imagine, the skittish leadership of China demanded the opening of the historic Forbidden City where the Emperor used to live, but became a Forbidden Nation as far as speech and culture are concerned.