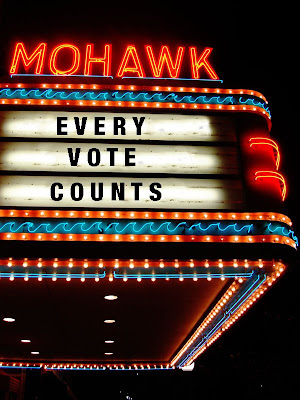 THE MOHAWK THEATRE IN NORTH ADAMS now being restored.

Voters in Massachusetts will have a crucial decision to make at the polls in November - and it's not just the presidential election.

Once again, they'll be faced with a proposal to get rid of the state income tax - an initiative that's getting more attention this time around because of the economic crisis.

It's called Question 1 - a proposed repeal of the state income tax and of course, the capital gains tax. The greedy are never satisfied.

Supporters say it will take money out of the hands of Beacon Hill politicians who have done nothing but waste it for years. Ask someone making minimum wage in North Adams who gets fuel assistance, Or a senior who uses the Spitzer Center. Or any teacher.

We have a bridge to fix, a city that is already running on fumes, and don't need to see local aid take another hit.

I think it's a reckless idea.

"This is throwing a bomb into government," said Peter Meade, head of the Vote No on 1 Committee. "If you vote yes, you're voting to increase the tax on your home."

For more information about how this measure will affect your town or city, check out this interactive map and web site.
Posted by Larry Murray at 6:19 PM