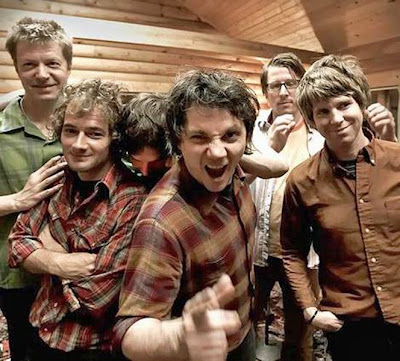 Wilco, arguably the greatest rock band working today.
I think Wilco is a brilliant and innovative programming choice for Mass MoCA. It is also the best thing to happen in North Adams in years. It is the sort of popular attraction that will make North Adams the center of the universe for fans of rock and roll. Ready or not, this is no cookie cutter event, it's our own mini-Woodstock. Let's hope the city of Spaghetti Suppers and 50/50 raffles has the class to pull off such an important and highly visible event.

One of the unusual amenities being promised is a bicycle valet. Now that is out of the box thinking! 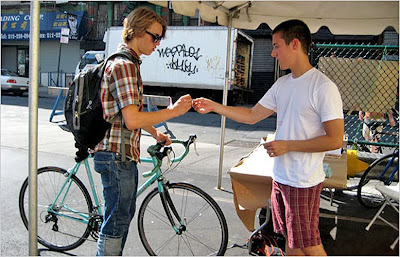 Using the Ashuwillticook Rail Trail? You can take it from Lanesboro to Adams, but then it's Route 8 until the final leg is built. Waiting on the other end there will be a bicycle valet for the Festival, a first for Mass MoCA.
If you are wondering just how they are predicting 10,000 when the Hunter Center at max can hold 900 people standing, 650-700 sitting, there will be three stages set up at MMoCA. The main one will be in the huge field behind MMoCA that is partially owned by National Grid. It's an immense undertaking. Mass MoCA's tech staff is top notch, and handling three stages at once will require an awful lot of good people to pull off successfully.

From what I gather Wilco will not only perform as a band, but also individually.

Wilco will headline the festival with two performances, with additional individual performances by all the Wilco members’ side projects, including Glenn Kotche’s On Fillmore, The Nels Cline Singers, The Autumn Defense featuring John Stirratt and Pat Sansone and Mikael Jorgensen’s Pronto.

They are only selling weekend tickets not one day at a time, which admit purchasers to every event. It is a logistical challenge. If they follow their usual pattern of residencies, they will do half a dozen shows - or more - over the period, each one featuring different combinations of musicians and repertoire. They like to review their recordings without ever repeating a song on any of the set lists. 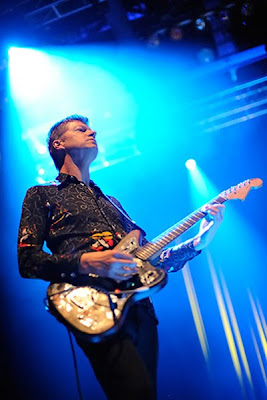 Fender bender Nils Cline.
There are incredible possibilities with this event, and I hope it succeeds. The Berkshires could develop a popular-rock-mainstream live performance series to equal Tanglewood, and this is the leading edge of a move towards that. That it will happen in the Northern Berkshires is something to cheer about.

Wilco last appeared at Tanglewood and garnered rave reviews even as the ushers tried to keep people plastered to their seats. I love Tanglewood (spent a summer there in the press office once) but the BSO management and trustees have dithered long enough and clearly does not want to dilute its image as a classical music venue by going populist.

Update and mea culpa: Since I wrote those harsh words, the BSO has announced the appearance of folk-rock group Crosby, Stills and Nash at Tanglewood, scheduled for September 1 in the Shed. In addition, jazz legend Herbie Hancock slated for August 9. The summer is shaping up to be a great one.

Though I continue to be concerned about the future of classical music, and the greying of its audiences. In recent times we have seen theatre, dance and contemporary art reinvent themselves over and over. But classical music has hardly changed in 150 years. There's a lot that can be done to bring in more young people, but change is incredibly difficult to sell to the benefactors who make mammoth operations like the BSO and other orchestras possible. It can't be done on ticket revenues alone, and those with the checkbooks call the shots.

Anyway, Stockbridge is in for some fun. And so too is North Adams. The Berkshries are in for something different, very populist, yet tinged with contemporary music, art and old fashioned money. The question is, will it draw a younger demographic, and will their needs be met as smoothly as the older crowds.

Let's hope there is a sensible balance between making sure it is a great experience for concert-goers and residents alike.

With the tickets now on sale I suggest you act soon since I sincerely doubt there will be any left by the time we get to the event itself. Of course the scalpers will try to get their pound of flesh. Word.

Below is the official announcement for the event.

The Hunter Center at Mass MoCA.
The SOLID SOUND FESTIVAL is a new festival curated by the Chicago band Wilco. It debuts August 13 - 15 at MASS MoCA (Massachusetts Museum of Contemporary Art) in North Adams, MA. The SOLID SOUND FESTIVAL is an independently promoted and ticketed three-day event of music, art, comedy, interactivity and more. Wilco headlines the weekend, in the bandʼs only East Coast performance of the summer. This new festival also presents individual performances by all the Wilco membersʼ side projects including Glenn Kotcheʼs On Fillmore, The Nels Cline Singers, The Autumn Defense featuring John Stirratt and Pat Sansone and Mikael Jorgensenʼs Pronto.

Art on display during the festival includes the Sol LeWitt wall Drawing Retrospective (chosen #1 exhibition of the year by Time magazine); Inigo Manglano-Ovalle's Gravity is a Force to be Reckoned With; a major exhibition of work by Petah Coyne; Material World: Sculpture to Environment, a group exhibition; Leonard Nimoy's Secret Selves; and a new installation by Michael Oatman.

Tickets for Wilco's Solid Sound Festival will go on sale on-line on Friday, April 9, at 10 AM through www.massmoca.org or at 11 AM in person at the MASS MoCA Box Office. More information is available at www.solidsoundfestival.com. From April 9 to May 31 tickets for the three-day event are $78, after June 1 tickets are $91. Children under 6 are free. The event is rain or shine. Tickets are general admission and are available through the MASS MoCA Box Office located on Marshall Street in North Adams from 11 AM until 5 PM daily.
Posted by Larry Murray at 2:17 AM

I am excited about this show, and love that you're written it up here, but I wanted to point out that you can't actually get to North Adams from the Ashuwillticook rail trail. It ends in Adams, after which it's another 6.5 miles north to MoCA.