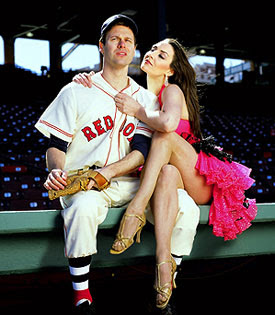 George Merrick and Shannon Lewis
in a publicity photo for Damn Yankees at Boston's North Shore Music Theatre in 2006.

Thank goodness for Damn Yankees. It's probably the best sports musical ever written, and for those of us in the Northeast, we will be able to enjoy it again August 5-21 at the Weston, VT Playhouse.

(For a rundown on the Berkshire's Summer of 2010 Schedules, visit Berkshire on Stage which lists all the major companies.)

I first saw it in its original Broadway outing back in the late fifties, and have never stopped loving it. "You've Gotta Have Heart" and "Whatever Lola Wants" are so eminently hummable while "Steam Heat" can be a great dance number.

Instead, lately it seems the jukebox musicals are becoming the new form for musicals, from Mamma Mia! and Jersey Boys to Rock of Ages and American Idiot, that last one recycling a Green Day 2004 album. Now, there is no question that the music in question is good, even great, but the underpinnings, the book, the plot, the depth is pretty shallow. In Damn Yankees we have the issue of selling one's soul to the Devil while in Mamma Mia! we have a pastiche.

Here in the Berkshires we have the additional curse of the "tribute" shows, including one which I attended that supposedly saluted ABBA. In the middle of the show they scrapped ABBA and started playing anti-Disco music which clearly showed they hated playing ABBA in the first place. It was insulting to those who paid to enjoy the songs of the Swedish pop group. The venues who book these scandalous second rate shows are shortchanging their audiences and endangering their "brand" by diluting it with pap.

Audiences love these pop music revues, and there is no shortage of ticket buyers, so what is a commercial producer to do?

The lack of substance in musicals has always been a problem. But would you swap Sweet Charity for say, Footloose?

Sports musicals are rare, and plays about the subject are few and far between. Here we can count our blessings that Kate Maguire (Artistic Director of the Berkshire Theatre Festival) is a fan, a BIG fan of baseball. WIthout her, we would never have gotten to see the nostalgic and impressive Red Remembers last fall.

But isn't it about time someone did a credible job on Take Me Out, also about baseball players? Roy Williams new play about boxing, Sucker Punch is also intriguing. In the UK there are lots of plays about rugby, cricket and their version of football, but where is the American basketball or football tale to keep audiences riveted to the stage. 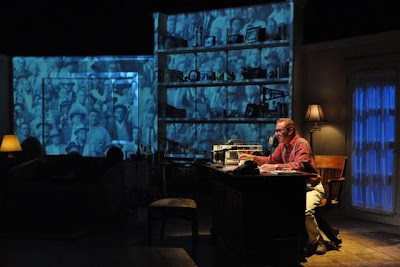 Dave Garrison as Red Barber in the Berkshire Theatre Festival play, Red Remembers.
Don't think there aren't sports fans in the audience, and theatre lovers at the stadium cheering on the local team. Audiences cross over all the time. Indeed I contend that a someone at the baseball stadium is more likely to buy a ticket to a stage show than some television viewer watching Survivor.

The world is divided into those who sit at home and those that go out. People who are always out and about will eventually discover local theatre and music. The couch potatoes only leave the nest to scoop up more junk at WalMart.

To expand audiences for the arts, it is possible that sports could be a better magnet to draw new people in than the jukebox.
Posted by Larry Murray at 10:38 AM