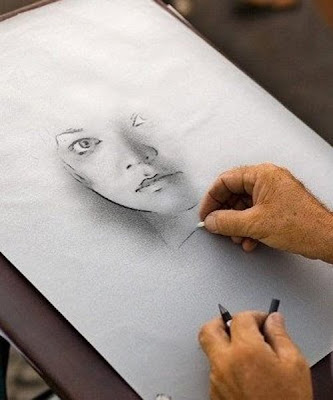 Portrait of Katie as an Artist.

When local songstress Katie Johnson plays host for a Broadway Open Mic Night on April 16, she will be stepping into a new role as entrepreneur extroadinaire.

Based on a wildly popular similar event a year ago, it's part soirée, part cabaret, and part reunion, featuring an open mic and some of the Berkshires best singers. You never know exactly who is going to sing, or what, but it's a rip roaring good time. And there is a bit of humor and irony squeezed in between the notes. 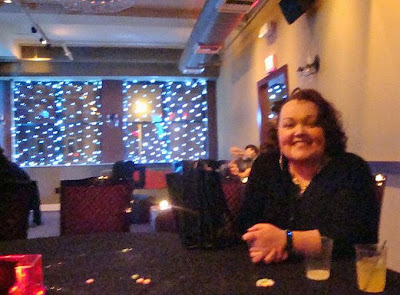 Katie Johnson will host a Cabaret at Taylor's April 16th.
Katie Johnson is an impassioned artist who has a trumpet of a voice that lends itself to boldly expressive singing. Katie was a huge hit at last year's highly successful Cabaret Night. Katie's credits include but are not limited to Urinetown, A Funny Thing Happened on the Way to the Forum, Fame: The Musical, Chicago, Annie, Sound of Music, and Cinderella.

Though Katie is gaining a following as a singer, she also has an impressive number of Facebook friends who revel in her witty postings. Yet not too much is known about the real person behind the microphone. So for the past week or so Arts America has been exchanging emails about her life and music.


So is this Cabaret at Taylor's a big deal?

Its a HUGE deal. A Broadway open mic night in the Berkshires? Are you kidding? I've died and gone to heaven. When I'm revived, I will spread the news that I have seen the promised land and it is in North Adams, MA. Hallelujah!

For one thing, I've never hosted an open mic night before. And I don't consider myself a stand up comedienne by any stretch of the imagination so barring any unforeseen mishaps like sliding off the top of the piano while trying to channel Michelle Pfieffer in The Fabulous Baker Boys, it'll be more about letting everyone get a chance at the mic than clever one liners from me. I'm just going to try to be a classy, encouraging, mega-sexy host. My genius lies in my simplicity and fear of crickets.

Why do audiences love these informal gatherings so much?

Some remarkably talented people love to sing at cabarets. Some who will be there are part of our theater scene, and others I met while studying under Sheri James Buxton, who has been my inspiration for years. With cabaret open mike, the response I always observe from new audience members is "What a great night, I had no idea there was so much talent!"

I also hear "Katie Johnson, you are talented and adorable. Why are you still single?" a lot.

And people can be so helpful. Recently, at a local cabaret, I had a women tell me that she didn't like my hair cut and gave me the number of her very expensive hair stylist in South County.

How anyone could pass up a night of live music and cocktails is beyond my comprehension. Its not about being the best singer.. its about saying something in a song that means something to you.

I can't afford therapy so I sing in cabarets.


Katie, l Let's talk about your piano player who supports all these different singers. It takes skill and fast reflexes to offer singers stylistic freedom while maintaining the tempo. A new singer’s expressive turns can't be known in advance. So the pianist has to be able to turn on a dime. Good ones are hard to find, right?

I originally had asked Brian Usifer (you can read an earlier interview with Brian here) who I met performing in Fame the Musical in 2006 at Barrington Stage Company.

Happily for him and sadly for me, he's in rehearsal for a show in New York City and I would've had to drive him to Wassaic almost immediately after the cabaret and even doing that I was not sure I could get him back in time for his gig.

I almost panicked. Then I remembered that Carlton Maaia II is back in the Berks full time. He has saved the day. We met when he, Kara Demier and I worked together. He is one fantastic pianist. He knows musical theater, jazz and a great deal of other styles. 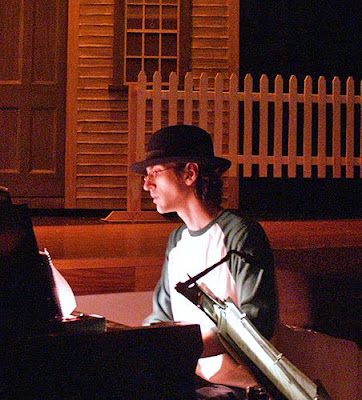 Carlton Maaia II will be the Music Director.

When did you first know you wanted to sing?

For me it was a 6th grade moment. My teacher announced that the holiday concert needed singers for a "special" chorus. I desperately wanted to be in that chorus so I sat up straight in my chair and sang out as best I could as she walked up and down the aisles listening. She tapped my shoulder (which I think in today's school system would get her fired for inappropriate touching) and from then on I knew I would sing for the rest of my life.

Of course, music was always around the house growing up, thanks to my father. He played early jazz, ragtime and a lot of the old Irish tunes. Not exactly the type of music a kid wants to listen to but it grew on me as I got older.

As I evolved, I grew to love the great standards and singers like Ella Fitzgerald, Nina Simone, Julie London, Peggy Lee and Betty Hutton. 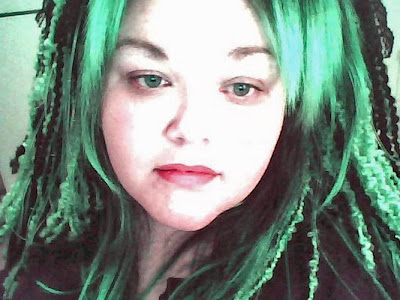 Katie Johnson as a Rasta Woman. She can sing in a variety of styles.
How do you select your songs?

I pick songs that say something to me or I think speak in a unique voice. I listen to all genres of music all the time. Then a song will come along and knock me off my feet. A song like that just demands to be sung so people know how great it is.

A good example is Driving Naked by Nikos Tsakalakos and Jess Digiacinto which I first heard at Barrington Stage last year.

Barrington Stage is unique in their commitment to new music and musicals, aren't they.

The best. The Pool Boy by Nikos will get a fully staged production this year at their Music Lab. And Bill Finn hosts a show on Labor Day weekend every year at BSC called Songs by Ridiculously Talented Composers You Probably Don't Know But Should. He brings in all sorts of great talent. Students from the Musical Theater MFA program at NYU. Broadway singers from NYC. Locals. Bill introduces the audience to brand new songs written by these...well... ridiculously talented composers. 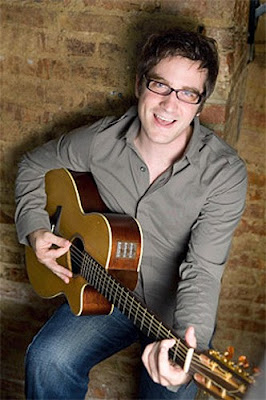 The promising composer, Nikos Tsakalakos whose Pool Boy will get a full production this summer at Barrington Stage.

Where do you see your life and career going?

In a perfectly normal family of hard working civil servants, I became the black sheep who was drawn to the arts. I live, eat and breathe it. Commercial, nonprofit, there are many choices. Lately I've been drawn to complexities of casting, and think I'd make a good theatrical agent. I have had the unbelievable good fortune to have gotten my feet wet at BSC where there is so much talent and innovation.

Singing can be fun too, especially though it helps with the rent if there is a paycheck involved. I really love singing for cocktails. But the level of training, talent and dedication that is needed to succeed is daunting. Perhaps with perseverance my day will arrive.

Do you think there is enough of a critical mass to support Cabaret on a regular basis in the Berkshires?

We won't know until someone makes a serious commitment at it. Are there people who love to sing at cabarets? Yes. Is it easy to find a venue to host a regular cabaret night? It's a pretty unfamiliar way to make money for most restaurant and club owners. It won't happen overnight, but it can be done.

I would love to parlay this night, if successful, into a once-a-month night at Barrington Stage at Stage 2 during the summer. I would love to share the stage with other singers who live or work in the Berkshires. To name a few, there's Jeff McCarthy, Harriet Harris, Tyne Daly, Michael Winther, Sally Wilfert, Heath Calvert. Donna Lynne Champlin, etc. These are people who can not only deliver a song, but also encourage local singers to stand up and do the same.

Where do you go to be entertained?

Actor Frank LaFrazia and I are hooked on karaoke. Sometimes colleagues from Barrington Stage and the Berkshire Theatre Festival will get together for a night of drinks and song at Michael's in Stockbridge. And I love the Dream Away Lodge especially on Hootnanny night.

This past year, I've joined a rock/blues band with a few local guys that I call "The Alan Bauman Project". They are introducing me to music I never thought I could sing which excites me for every rehearsal.

Katie Johnson, 32, was born and grew up in Lynn, MA, (City of Sin) and graduated from MCLA in North Adams, where she focused on Arts Management. She is Assistant to the Producing and Artistic Directors at Barrington Stage Company in Pittsfield, MA. While currently happily ensconced at Barrington Stage Company, who knows what the future will bring.   When she acts as host for the Broadway Open Mic Night she will be stepping into a new role as entrepreneur extroadinaire.
Posted by Larry Murray at 3:16 PM