Cirque du Soleil's Kooza and Saltimbanco in Boston and Amherst 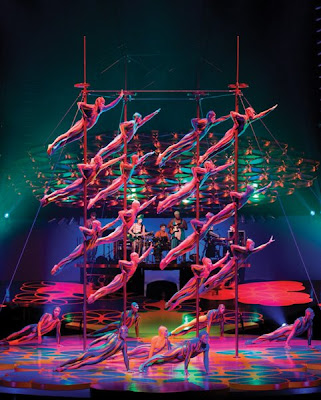 Cirque du Soleil has remade the traditional circus into a true artistic experience. Their mission is to invoke the imagination, provoke the senses and evoke the emotions of people around the world. In the process of reinventing the art form, this Montreal based company has grown from a small troupe of twenty performers into a worldwide phenomenon. They have 4,000 employees, and 17 shows currently being performed all over the world. I am impressed that they dispensed with the circus animals that were often brutally forced to entertain us. Good thing too, since the handlers often utilized hurtful training methods on the animals in their care.

Cirque rethought the way everyone from the clowns to the trapeze artists perform, raising the bar to the point where even Ringling Brothers tries to copy their concepts, costumes and choreography. But nobody does it like the Cirque people. This coming month, there will be two Cirque du Soleil troupes visiting Massachusetts. One is a tent show, the other a touring arena production.

Arriving in Boston on September 5 for a month's stay at the Bayside Exposition Center, Cirque du Soleil will set up their Grand Chapiteau near the extensive parking lot and MBTA station. The show is fresh and new and "Kooza" tells the story of The Innocent, a melancholy loner in search of his place in the world. The plot, of course, is just the connective tissue that holds together the half dozen acts that are presented with the most glorious costumes, lighting and special effects. Click here for Kooza information 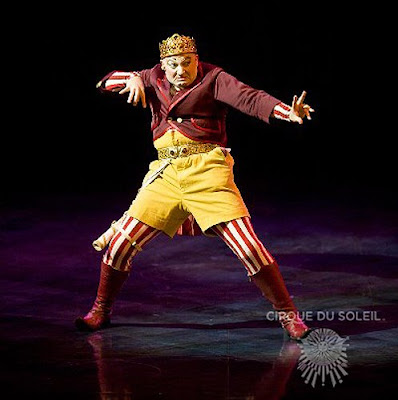 One of the Cirque clowns in Kooza in Boston, September 5- October 5

The Arena Show is an old favorite of mine (I have seen almost all the Cirque shows - three of them multiple times) titled Saltimbanco. It will play the Mullins Center at the Univesity of Massachusetts in Amherst from September 3-7. Saltimbanco takes spectators on an allegorical and acrobatic journey into the heart of the city, celebrating the people who live there. Click here for Saltimbanco information

Either show will provide memories for a lifetime. I guarantee it. Like me, you may be bitten by the Cirque bug, and start thinking about seeing their five shows in Las Vegas (Mystère is still the best in my opinion) or Orlando to see La Nouba. If you are ever in Hong Kong, take the boat to Macau for Zaia.
Posted by Larry Murray at 11:02 AM

In an arena setting, where are the best seats? There is floor seating, but is it better to be mid-level or higher in order to see it all? On a side or full-front view?

In an arena, I think it is best to be closer rather than further away. The arena presentations I have seen by Cirque put me so far away from the action that I had a difficult time feeling involved. And all those sports advertising signs were really turn-offs.

The tent shows are better since no seat is really that far away from the stage, and there, the seating is more of a horseshoe arrangement. Even the arena shows I have seen are done at one end of the stadium, so it is not quite in the round.

Having seen Cirque more than a dozen times, I personally try to get seats in the center, about a dozen rows back in the first section, but they get premium prices for those locations, and rarely put those particular seats on sale. But I have also fully enjoyed their shows from the sides, as long as it is not the very far side, and allows me to be closer without mortgaging the house.

So the "grand chapateau" tent presentations have very few bad seats, but an arena show has lots. Avoid the ones in the back, for sure.