Netflix Has a Meltdown 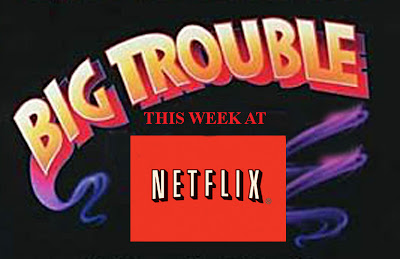 Netflix spoiled me. With only rare exceptions, I would mail back a DVD and receive a new one in the mail two days later. Years ago, when they first began, they were not quite as reliable. If you returned your discs too rapidly, and managed to get two turnarounds a week, they deliberately slowed down your replacements. But on the internet, you don't claim one thing and do another with impunity. Netflix subscribers compared notes and verified that such was the case. A class action suit followed, and settlement finally took place. Of course, I am still looking for my free month of one additional DVD "payback" sometime this fall, but I am patient.

Then this week happens. The week without any new discs at all for most of us.

I count my blessings that Netflix has been good for some time now, until this week when they went bad, and things could soon get ugly if the problems aren't over. Look at eBay, a totally different website today than it was when it began, and most buyers and sellers will tell you the changes have rarely been improvements. eBay proves it is possible to be both profitable and hated. Their sales in the US peaked some time ago, and it is no longer a source of growth for them, so they raise insertion fees and tighten the rules to find more profits. They are a company that has peaked, and becoming just another internet retailer. 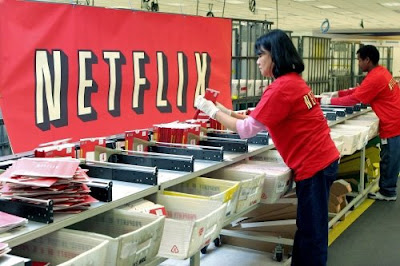 Packing up DVDs is backbreaking work at Netflix

This week, when I didn't receive my new DVDs in the mail I was surprised but forgiving. Under Reed Hastings, Netflix has done a great deal to reinforce their customer service, and their customers have made it of the highest rated internet companies for some time now. Keeping people satisfied is no easy task, but with WalMart, then Blockbuster, and many smaller companies nipping at their heels, I believe it was a combination of superior attention to detail and a better selection of movies that has put Netflix in the lead. Despite urban legends, pricing is only part of the picture. And if you are one of the bottom feeders who is like a ravenous shark at the thought of saving a buck or two - you know who you are - you have no loyalty anyway. So screw saving pennies, it is performance, selection and reliability that counts.

The short of it is that while some delayed discs were mailed sporadically last week, almost all of their eight million customers did not get their replacement discs at all, and will thus lose one week out of the month of the service they paid for. Netflix is quick to announce that all customers will get a 15% discount off of next month's service fee, but one week is 25% of a month, not 15%. Bad move, Nexflix. You should be overcompensating, not letting the bean counters run customer service. Expect more legal action, especially if things are not fully restored. 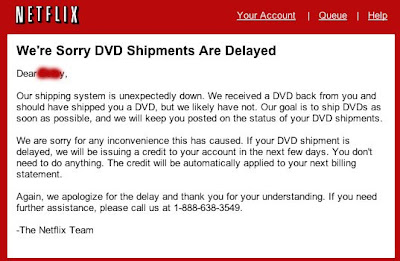 Netflix has not been very specific about their technical problems, but my best guess is that they can be laid at the feet of Microsoft with whom they have formed a strong alliance. Have you ever used Microsoft programs? You go to bed with dogs and you wake up with fleas. The worst part is that when things went south, they couldn't figure out what was causing the problems for days. Netflix has had some of the best techies in the world, and they went down for the count for almost a week. And things are still not up to speed, my DVD records say that my discs will be mailed Monday or Thursday, though their notice on site and via email says they were all caught up by Friday. Not true. Wishful thinking. The effects of the problem will be felt into next week at minimum.

The media has not done a particularly thorough job of covering the problem, as this incomplete report in Home Media Magazine - a trade publication which covers Netflix extensively for the DVD trade - shows. Home Media Magazine's only story as of 8/16. There have been lots of reports on the effect this is all having on their stock price. (Very little).

In the end we are all the problems solved? That remains to be seen. I'm anxiously watching my mailbox, and the withdrawal pangs are not all that bad. Only the lack of something new and decent to watch is making me think about going to a video store. Oh, the horror.
Posted by Larry Murray at 9:48 AM