The North Adams Battle of the Benches

Mayor John Barrett has been battling the placement of benches in downtown North Adams for years and years. He is sure they are a nuisance, and would have the unfortunate effect of attracting people to the downtown. The "wrong" kind of people to him, you know, kids, families, citizens, shoppers. Private citizens have paid for and placed some benches there over the years, but he has yards and yards of red tape to wrap around such efforts.

So what does this have to do with the Arts in America? Only this: 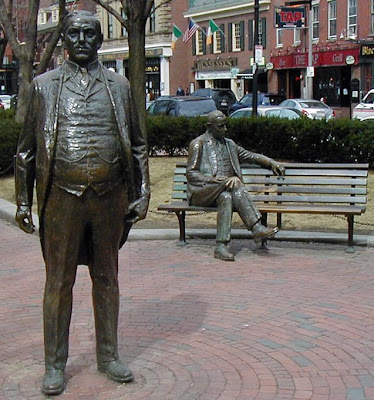 James Michael Curley was Mayor of Boston for decades and decades, and a book was written about his life, "The Last Hurrah". I was pals with that Mayors son, Francis Xavior Curley, a Jesuit priest until his passing a decade or so ago. He never got to write the book about his father he always said he had "up here", in his head. Father Frank made a wicked good martini.

Well the Curley family is all gone now, but the City of Boston remembered him fondly, with some bronze statues, and a couple of benches right outside Ciry Hall. Tourists stop by the bench and sit next to the now silent mayor and have their picture taken. It lifts their spirits and provides a wonderful memento of their visit to Boston. 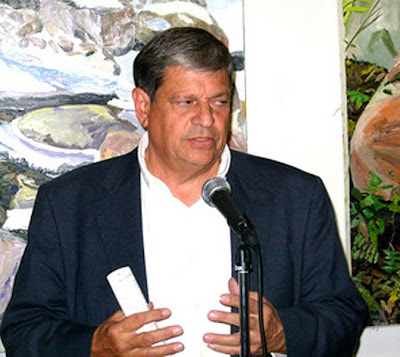 If only Mayor Barrett could see the wisdom behind a bench. Or two. Or more.

The sculptor of the Curley works is Lloyd Lillie who is currently Professor Emeritus at Boston University, where he began teaching in 1961. His commissions of local celebrities such as Arnold "Red" Auerbach and Mayor James Michael Curley are among the most popular public sculptures in Boston. Lloyd Lillie's Website

I believe he is still accepting commissions, and perhaps a similar bench work, that of a typical mill worker and honoring the city's industrial past would be appropriate.
Posted by Larry Murray at 3:42 PM

You little shit.
I've been trying to find you on the internet for years and years! Did you know we did a PMT reunion at Julie Goell and Avener the Eccentrics's island in Maine last year. No. Did you know I was married? No. Or that John is living in Ipswich and Michael in Newton? No! What's your fucking email? Tell me now or I will send out unemployed mime thugs to beat you mercilessly with nerf bats.
I miss you you old fart, write me! or check me out at www.jtormey.com. or both. COME ON!
Love ya guy,
J

we got bronze talent right here in the berkshires, we don't need no bu artist

If you wish to fund the design and casting of a bronze, I am sure you will be able to dictate the artist's residence as a condition of the commission.