Broadway in the dark 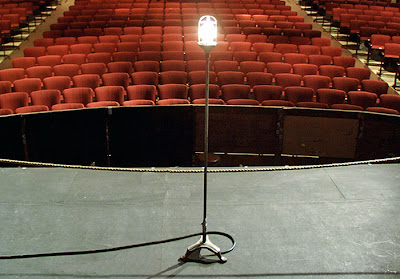 For the first time in its 121 year history, Local One of the International Alliance of Theatrical Stage Hands has gone on strike, closing down 27 Broadway shows. The eight shows remaining lit have separate contracts and the scalpers have descended on the available tickets, hoping to score a killing. The eight shows still performing include "The 25th Annual Putnam County Spelling Bee" which began at the Berkshire's own Barrington Stage Company. Others are "Mary Poppins," "The Ritz," "Mauritius," "Cymbeline," "Pygmalian," "Xanadu" and "Young Frankenstein."

As we commented here in September, this strike can spell doom to weak shows, and hurt theater-going in general. Theater is a billion dollar a year business in New York City, and affects everything from hotels and restaurant to the taxi business. While the union has a $4 million dollar strike fund, the League of American theaters and Producers, who already tightened work rules during the non-contract period, has a reserve of $20 million to weather the strike.

As one wag commented, "Even if the producers manage to cut union costs, you can be sure it won't be reflected in lower ticket prices."
Posted by Larry Murray at 6:22 PM