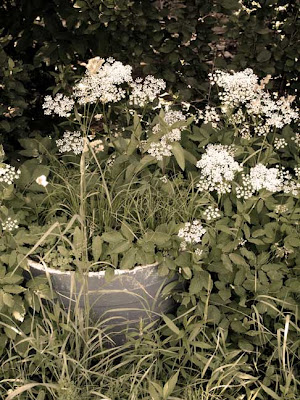 Unexpected flowers are always a joy to discover. 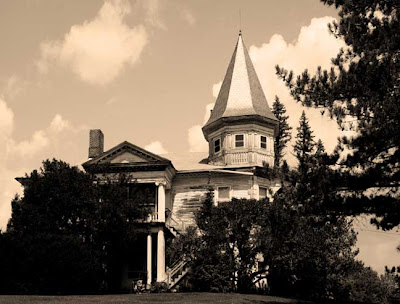 Jane and Jeff Hudson are a perfectly matched set, provided you like interesting pairings. They've literally made music together for many decades, and feed each others active minds with hundreds of morsels of interesting tidbits every day. That they chose North Adams in the Massachusetts Berkshires as their stage makes all of us who live here, their players.

I mention Jeff because without him, Jane would not be complete. And vice versa. But this is about Jane, a true Renaissance Woman if there ever was one, and the photographs she has on display at the gallery in her store, North Adams Anqiques, already a "must" destination at 49 Main Street, Open most days, but call 413-662-2221, they may travel a bit during the winter.

The image above is of a typical glorious but faded "Painted Lady" Victorian house. So many of them dot the landscape at unbelievably low prices. This one is home to the owner's of Racine's Farm, a local landmark for fresh produce in season, especially apples, corn and tomatoes. You can see additional images of the farm as taken by Charles Giuliano in Berkshire Fine Arts - which both Jane and I have written for on occassion. More farm images by Giuliano 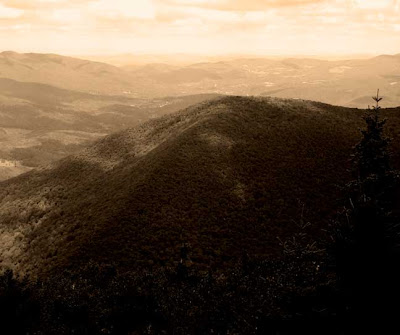 This sensual image of Goddess Earth reminds me of Delphi in Greece, which was considered the naval of creation by worshipers of the Oracle. The sun-dappled rolling mountains of the Berkshires, roiled by floods and glaciers are a wonder to behold. Jane captured this image from a viewpoint I have not seen before, and in the sepia treatiment Jane has given her images, it is timeless. I think it is difficult to make scenic views interesting from an artistic viewpoint, but she has succeeded in this carpeted view of nature's cover.

Speaking of Oracles, many political leaders asked the oracle’s advice before taking a decision, which indicated the crucial role it played not only in everyday life but also in political affairs. Today the arts are, in part, an oracle of the future. 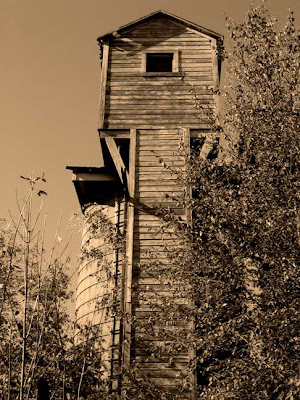 This silo image immediately brought to mind sensual thoughts, rough hewn phallic ones, and yet, the Trinitarian shape of the coal silo's topmost piece, um, points to other possibilities, including a finger pointing to Heaven. Jane tells me that the silo is still full of railroad coal, perhaps for the fires of Hell? Jane of course has critiqued thousands of images over the years both in her role as a teacher at the School of the Museum of Fine Arts and as a respected arts commentator. As with all of her images, it is always delightful to ask her to tell us a little about each one, and I won't spoil the fun more than I already have. 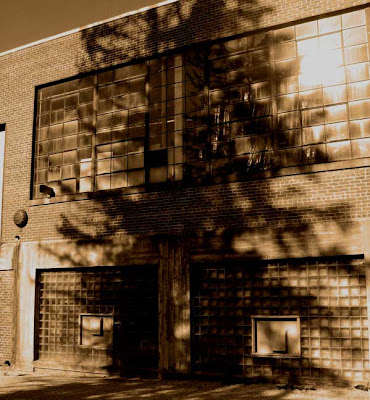 This is, I believe, one wall of the Cascade Mill in Clarksburg, and the shadow of an elongated tree. It prompts the question of what is permanent, what is passing. The pattern cast by the tree serves as a sort of ever changing pattern, but this is the sort of magical en plein aire moment artists often try to seize with their brushes (Monet comes to mind). While a camera is ideally suited for this task, a good photographer still has to wait and watch for the perfect confluence of light and shadow to occur. 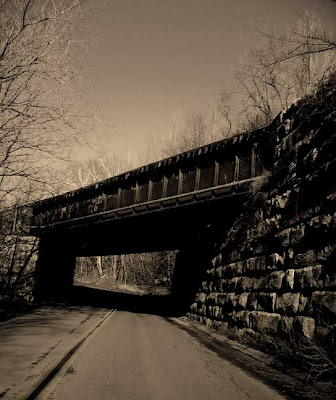 The trapezoid form is an accidental function of the railtoad bridge, partially because of the time of day and also due to the turn in the road which is a peculiarity of these old structures in North Adams.

There are many additional images on Jane Hudson's website, and on view at the Gallery itself. They are surprsingly affordable.

In a Boston Globe review, Cate McQuaid wrote of her work: "Hudson plumbs it with haunting eloquence, tying ancient and natural imagery with unnerving colors to create a visual pageantry of grief and hope."