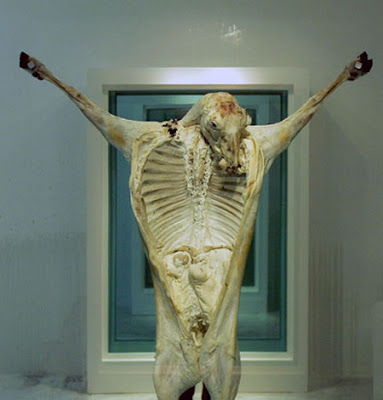 Art that gets PETA upset

What on earth is British artist Damien Hirst going to do with his butcher shop inventory of 30 dead sheep, two sides of beef, 300 sausages and a pair of doves? Why find a big dead shark to add to his art installation of course.

The art world continues madly turning out art that begs the question of who is mad here, the art world glitterati who love this stuff, or those of us who wonder where it will all end. 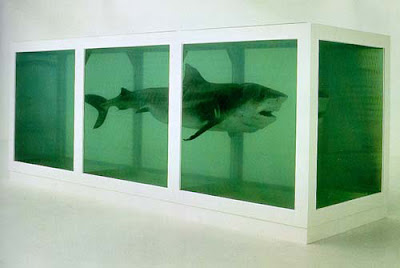 Hirst reminds me of Buchel. As the Buchel fiasco at Mass MoCA progressed, I spent a good deal of time researching his other works and came to believe that he was descending into madness at a pace that matched his own work. Messy voyeuristic bedrooms became neurotic enclaves, then massive tributes to obsessive compulsive collectors.

Just before he received the Mass MoCA commission his work became increasingly psychotic, turning on themes of hoarding, kidnapping and ultimately, to a archaeological dig for some future generation to figure out. And in the end, Buchel's madness was uncontrollable and the whole project collapsed. 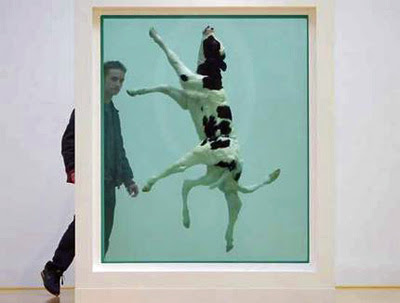 Hirst's "In His Infinite Wisdom" 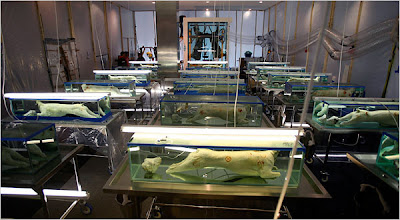 Here, Hirst is dissecting the world of the living to examine it, the remnants immersed in formaldehyde. His latest work was commissioned by real estate developer Aby Rosen, for his Lever House. It is called "School: The Archaeology of Lost Desires, Compehending Infinity, and the Search for Knowledge." Hirst says the work is a homage to Francis Bacon's 1946 "Painting". He was paid $10 million for it. 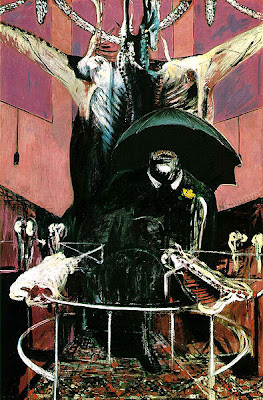 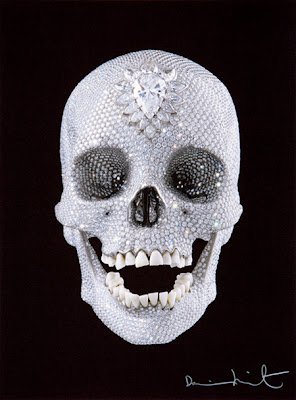 Hirst's skullpiece is called "For the Love of God. " This life sized platinum skull is decorated with 8,601 high quallity diamonds. He priced it at $100 million, making it the most expensive pice of contemporary art to date, but nobody bought it. Last I heard, it was available for half off, or just $50 million.

i don't see what is so wrong with this. art is anything you want it to be. if the dude isn't actually killing these animals, hell, let the man dissect and expose them for people to see. i personally love his stuff. if you're going to call him "mad", at least justify it, you give no justification whatsoever to why his work is "WRONG" in your eyes (i just faintly recall some rambling on about madness, crudity and absurdity and some other words i forget).