The Secret of Sherlock Holmes in Lenox 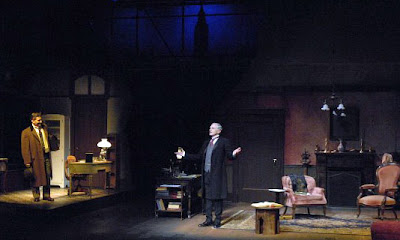 The stage is set at Shakespeare & Company. This is the clever set at their Founder's Theater for the new production which runs thorugh October 28th. (Kevin Sprague photo) 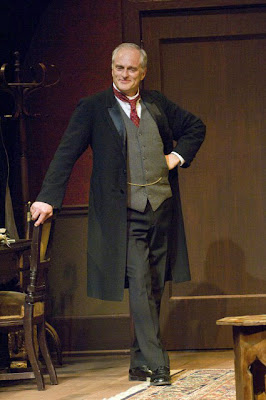 Michael Hammond contributes a new and memorable interpretation of the great detective in the Shakespeare and Company production. (Kevin Sprague photo) 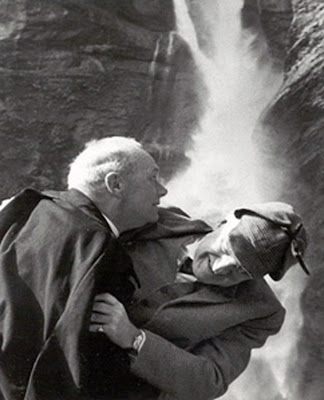 The classic fight to the death between Sherlock Holmes and the evil Moriarity as portrayed in film. 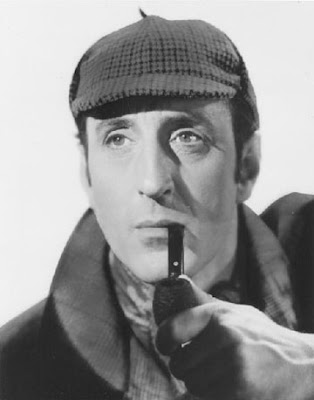 Basil Rathbone is the image of Sherlock Holmes for earlier generations of moviegoers. 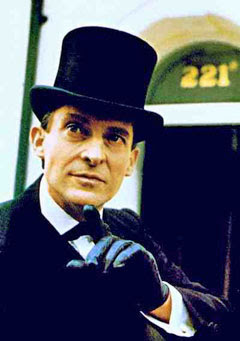 Jeremy Brett established a more contemporary Sherlock Holmes in the PBS-Granada series which was written by Jeremy Paul. At the urging of Brett, Paul also wrote the script for "Secret of Sherlock Holmes," creating dialogue directly from the Arthur Conon Doyle canon of books. The London production of this play starring Brett never made it to the USA. 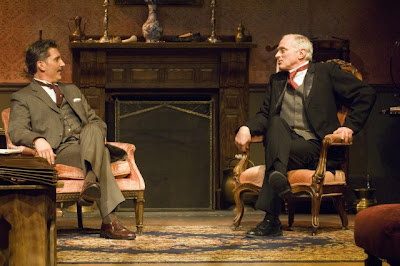 Dave Demke and Michael Hammond as Watson and Holmes have a fireside duel of wits. (Kevin Sprague photo)

The New Production at Shakespeare & Company is great fun and thought provoking. Is the secret really the truth? Or is there more to it than is being said. See the play and decide for yourself. You'll find no spoilers here.

Directed by the very capable Robert Walsh, the Lenox, MA production of this play is the long overdue American premiere, and Sherlockians by the score are making haste to see it. After all, it was originally produced in London's West End in 1988, and after a nearly two decade wait to see this thriller, the chance may never come again in this lifetime.

Read my full review of this show in Berkshire Fine Arts magazine.

Shakespeare & Company is making a major event out of this premiere, part of the 120 year Celebration of Sherlock Holmes. Information on performances, special events and tickets can be found here:

Secrets of Sherlock
Posted by Larry Murray at 10:30 PM

There are special eveents in connection with this production:

221B Baker Street Brunch: A Taste of Victorian Times

Purchase a ticket for the 2 p.m. or 7 p.m. performance and enjoy an authentic Victorian-styled brunch including specialty items like scrambled quail eggs and scones with marmalade (as well as traditional American items). Two seating times are offered: 10 a.m. or 11:30 a.m. Brunch and one ticket to the show are priced at $50 per person. There is limited seating for this one-of-a-kind brunch, so attendees are encouraged to book space now and choose a preferred seating time.

Advance reservations are available for a complete Sherlock Holmes Weekend Package, which includes the Friday evening sherry and chocolate dessert reception, presentations by Sally Sugarman, Scott Monty and Leslie Klinger, 10/20 pre-show dinner buffet, 10/21 brunch, and one ticket to either the 10/20 or 10/21 performance of The Secret of Sherlock Holmes. The complete package is priced at $195 per person.

7pm: The Secret of Sherlock Holmes

Hosted by Rosemary and Fabrizio Chiarello at their bucolic Gateways Inn, this event is a chance to meet the cast, fellow Sherlock fans and Sherlock experts in a beautiful setting where Holmes himself would have likely enjoyed an evening sherry. Chocolates are supplied by Chocolate Springs of Lenox. Admission is $30 per person.

12p.m.: Sherlock for Children, a presentation by Professor Sally Sugarman

“Children, like everyone else, should read the Sherlockian Canon,” says Sugarman. “However, there are many opportunities for them to visit Sherlock Holmes in other venues. The stories are often told through the Baker Street Irregulars, those intrepid child helpers of Holmes. There are other child sleuths modeled on Holmes. The game is afoot as we examine these children’s adventures.” Enjoy this dynamic presentation and peruse a selection of Sherlock Holmes collectibles while catching a sneak peek of Paulo Seixas’ beautiful set design for The Secret of Sherlock Holmes. A bibliography of books discussed will be distributed to participants. Admission is $20 per person.

1:30 p.m.: Sherlock 2.0: How the fascination with the great detective has evolved as we move into the 21st Century, a presentation by noted Holmes expert Scott Monty.

Monty, who has led the way in this field by bringing his love for the work of Sir Arthur Conan Doyle to fellow fans through a variety of media, is the perfect person to deliver this fascinating presentation. Admission is $25 per person.

3:00 p.m.:Why The Fascination With A 120-Year Old Detective? a presentation by Leslie Klinger, editor of The New Annotated Sherlock Holmes. Followed by book signing.

Get to the heart of the cultural love affair with the famous detective at this presentation by one of the world’s foremost experts on Sherlock Holmes. Who better than the editor of the definitive representation of the Holmes canon to tackle this issue in the beautiful setting of historic Lenox Library? Admission is $30 per person.

Enjoy a delicious, Victorian-styled buffet dinner amid the stunning views at the Shakespeare & Company grounds.

7 p.m.: The Secret of Sherlock Holmes

A wonderful location to enjoy a cocktail and conversation after the performance. Admission is $10 and includes one cocktail.

Brunch as Sherlock would have it. A reprise of the scrumptious October 7 event, featuring scrambled quail eggs, scones with marmalade, Chinese tea, coffee, and some traditional American fare.