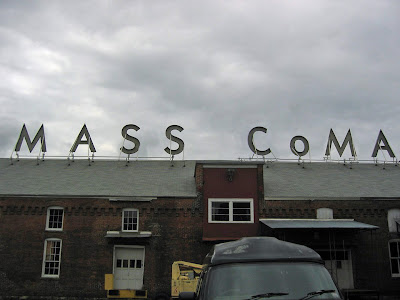 Lost in all the commotion over the decision to disassemble the never completed Training Ground for Democracy exhibit was a telegram that Christoph Buchel sent the Boston Globe. In it..."he offered to donate a permanent installation that would not cost anything to mount. He concluded the e-email with an image of the plan, a tweak of the museum's rooftop signs to spell out "Mass CoMA."

The Globe article by Goeff Edgers also carried details the local newspapers in the Berkshires avoided mentioning, or were too lazy to dig for. For example, it will cost the museum another $40,000 to remove and dispose of the remains, though not all of it will end up in the dump. A mile of cinder blocks, a house trailer, and numerous other items have some value which they may recoup, or donate to worthy causes. The MoCA Director, Joe Thompson is quoted as saying he will try "to find good places for those. Clothes, stretchers, beds, file cabinets. In some ways, what we have is a vast recycling effort."

The Weekly Berkshire Advocate, a shadow of its former sometimes feisty self, relegated a short mention to the back third of the paper, finding recipes and church suppers to be of more importance. Sometimes they just don't understand what is news and what is filler. Boring is as boring does. Their idea of controversy is publishing Jack Murphy's homophobic rants in their letters to the editor column. Not once, but over and over. Once was mroe than enough.

Anyway, Joe, I still think that "what we have" is the makings of a vast and newsworthy Tag Sale. Who says you couldn't lay it all out in the parking lot in roughly the same order it was inside and let people look it over?

The response to the controversy continues...

Re “Is It Art Yet? And Who Decides?” by Roberta Smith [Sept. 16], about the dispute between the artist Christoph Büchel and the Massachusetts Museum of Contemporary Art:

I believe that fuller and fairer treatment of the Mass MoCA’s conduct is warranted.

I say this not just based on my involvement in exhibiting the canceled Mapplethorpe retrospective (which was mentioned in your article), but also from my own experience working on installations, residencies and exhibitions with many living artists.

Having now worked closely with Sol LeWitt and Joe Thompson, the director of Mass MoCA, for more than three years on a retrospective of Mr. LeWitt’s wall drawings in Building 7 of the North Adams museum complex, I have had many opportunities to observe the museum’s treatment of artists, which I deem to be exemplary.

I’ve also had many opportunities to view the Büchel installation in progress, and to witness it evolve from a project of great promise to its present sad and unfinished state.

The writer is the director of the Yale University Art Gallery.

From a NY Times letter to the editor:

Perhaps it was hubris for Christoph Büchel to try to define and critique us in “Training Ground for Democracy.”

That he did not succeed in realizing his vision is not surprising. But the attempt may still be worth exhibiting, if only as a step in the evolution of his work.

So many artists have repudiated works that others found to be good. So many unfinished works are considered worthy, even better, perhaps, than they would be if they had been finished.