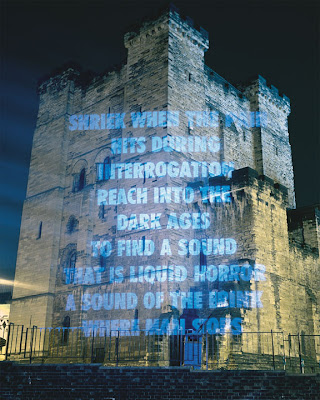 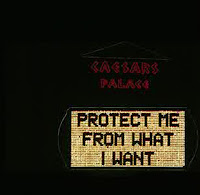 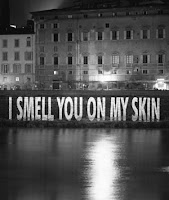 Some of Holzer's earlier work.

By the time it opens on November 17 Jenny Holzer's Gallery 5 Installation Projections will have replaced bad boy Buchel as Topic #1 among Mass MoCA watchers.

For thirty years, Jenny Holzer has used public places and great institutions as the venues for her work, including the Venice Biennale, the Reichstag, and the Guggenheim Museums in New York and Bilbao. Her medium is virtually anything. Her words have been previously cast in bronze, carved in stone, projected on a building and drawn on a T-shirt. It seems that wherever there is a surface, Jenny has words to provoke, prod and fill it. And though the casual observer may see the words as a graphic that fills a void, those who who think about it will enjoy the clever insights they reveal about the human condition.

Projections will use MASS MOCA’s massive Building 5 as a stage for her first interior light projections in the United States. She will also exhibit a new series of paintings shown, in part, at the 2007 Venice Biennale. She has an impressive collection of artistis credentials, but it is her work, and its pollitical, sociological and conceptual content that matters.

In a serendipitous coincidence, this artist who was born in Ohio and trained at RISD, MFA and the Whitney, operated out of New York and travelled the world, finally settling into Hoosick Falls where she continues her pioneering work.

More background is at Wiki Profile
Posted by Larry Murray at 6:45 PM

On October 3, episode 2, “Protest,” will be previewed. This episode examines the ways in which four artists use their work to picture war, express outrage, and empathize with the suffering of others. MASS MoCA curator Susan Cross, Williams College assistant professor Ondine Chavoya, and David Breslin, studio assistant to featured artist Jenny Holzer, will join Clark assistant curator of education Danielle Steinmann in engaging the audience in a discussion about the episode. Cross recently organized Spencer Finch: What Time Is It on the Sun? in addition to installations by Erik van Lieshout and Fransje Killaars. Chavoya focuses his research on Latina/o visual culture, the art of California, film theory and independent media, queer theory, and the history of music video. Breslin has been working as a studio assistant to Holzer since 2004 and has been involved in several large installations. He is a PhD candidate in art history at Harvard and is a 2004 graduate of the Williams/Clark Graduate Program in Art History.

Artists profiled in the episode are Jenny Holzer, who maintains a studio in nearby Hoosick Falls, NY, Nancy Spero, An-My Lê, and Alfred Jaar. Holzer is well known for her subversive use of text and poetry, and her focus on cruelty, devastation, consumerist impulses, death, and disease. Whether in an installation of declassified war documents or a large-scale projection of text from provocative essays, she presents words in ways that are overwhelming and exacting, and illustrate the power of language to harm or heal, expose or conceal. Spero, a pioneer of feminist art, creates works that make an unapologetic statement against, and generates discussion about, the abuse of power, privilege, and male dominance. Landscape photographer Lê draws on her childhood experiences as a refugee of the Vietnam War to examine the impact, representation, and meaning of war, as well as the relationship between military activity and the surrounding terrain and our present-day involvement in the Middle East. Jaar’s installations, films, and community-based projects communicate a specific experience to his audience, capturing beauty, but also confronting horror. He identifies the gap between reality and its representation, and his work explores the limits of art to accurately represent tragic world events, from genocide to poverty and famine.