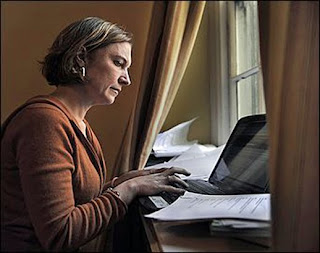 There was a moment not long ago when Karen Zacarias became sure that her blossoming playwriting career would be lost among sippy cups, baby dolls and field trip forms. Arena Stage made the difference.


Can you have it all? Playwright Karen Zacarias certainly seems to have found the secret. With three young children at home and a blinking computer awaiting, the 2009 Playwright in Residence for Washington, D.C.'s Arena stage is a prolific writer. She finished five plays the year her youngest was born, and the ideas just keep on coming. She has had four of her plays staged in the past year or so. Legacy of Light is one that Arena Stage produced. But the double duties of mother and writer takes its toll. "I haven't slept in years," she says. Thanks to Arena's program, she has found a way to live two lives.

Today news came that the path that Zacarias has blazed will soon be joined by two additional women playwrights Lisa Kron and Amy Freed, who will each start their three-year residencies in July 2010, and then Katori Hall and Charles Randolph-Wright, who will begin in January 2011. It's all part of The American Voices New Play Institute. The Institute—integral to Arena’s mission as a leading center for the production, presentation, development and study of American theater—isdesigned as a center for research and development of effective practices, programs and processes for new play development in the American Theater.

In addition to the first round of Resident Playwrights, the Institute will also host Project Residents Lynn Nottage and David Henry Hwang, who will be commissioned through the Institute to write a play that Arena Stage will produce.

In addition to the residencies, the American Voices New Play Institute operates with a suite of interrelated programs, including the New Play Producing Fellowships, Theater 101 Audience Enrichment Seminar, administration of Round One of the NEA New Play Development Program and major convenings of American artists and arts administrators around issues facing the new play sector.

Under the leadership of Arena Stage Artistic Director Molly Smith, the Institute is guided by Arena Stage Associate Artistic Director David Dower and works in partnership with Georgetown University’s Theater Department, led by Dr. Derek Goldman. The American Voices New Play Institute is made possible through the keystone gift of $1.1 million in support from The Andrew W. Mellon Foundation.

"With the launching of the residencies for the American Voices New Play Institute under the visionary funding of the Mellon Foundation, we at Arena Stage are eager to support and help transform play development around the country,“ said Smith. “These writers are so different; my mouth is literally watering at the thought of what each may write. From major dramas to musicals, comedies, one-person plays and interview-based stories, the range is exhilarating. Now the writers will have the time, support and finances to be able to do their best work. Each writer is splendid and has the talent and insight to surprise us all.”

The primary purpose of the residency is to write plays and to advance professional outcomes for the participating writers, as well as to help Arena Stage test and develop best practices for such residencies in theaters around the country. The playwrights will determine their individual involvement in the life of the theater company. Ultimately, Arena Stage hopes the Institute will make the case for the power, practicality and impact of resident playwrights in regional theaters nationwide.

"This first cohort of playwrights is going to really advance the inquiry here at Arena Stage,” shared Dower. “They come at it from so many different perspectives on form, process and story, and they have all grabbed hold of the opportunity to help develop the role of the playwright in the institutions of the regional theater. So I expect we'll not only see work they write popping up on stages around the country, but I hope through their leadership we'll see increased opportunities for playwrights' residencies around the field."

This is one of the most exciting initiatives by any American theatre company. The nurturing of playwrights is essential for the theatre's future.

For more information regarding all of the American Voices New Play Institute programs please visit www.arenastage.org/institute.
Posted by Larry Murray at 9:13 AM