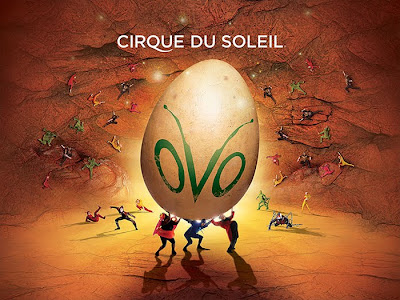 Ovo immerses you in a colorful ecosystem teeming with life.

First a little background before the OvO review. Hartford is the seventh city on the worldwide tour of OvO, which began in Montreal in April 2009. It's arrival in Hartford follows the successful runs of Dralion there in 2003, Varekai in 2005 and Kooza in 2008. It plays until July 11 and then packs up and heads to Boston where it plays from July 22 to August 15. So now, the question is, how does OvO measure up compared to the earlier shows?

OvO is simply the best show Cirque du Soleil has ever sent on the road. Written and directed by Deborah Colker, it has moments of sheer spectacle, held together with dance, movement and pure theatrical wizardry. During a performance you may notice subtle references to artists such as Gaudi, Dali and Piazzolla while enjoying performers dressed as butterflies, spiders and even a Ladybug looking for a mate.

OvO (which means egg in Portuguese) is the 25th quirky show from Cirque, created for the company's 25th Anniversary. Currently playing in Hartford, next month it moves on to Boston, then to Washington, DC in September. 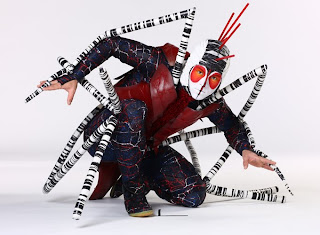 Spiders are more artistic than scary.
Even for those who have seen Cirque du Soleil, it is difficult to describe the experience. Those flat two-dimensional televised snippets of their performances don't do it justice, and even in print, how can words describe a basically wordless show?

You don't just see a Cirque show, you experience it. On the way in you may hear some first time ticket buyers complain about the ticket prices (they're not cheap) but you never hear that on the way out. You get a lot for your money. There's more imagination and entertainment compressed into 2.5 glorious hours than you will get in a month on commercial television.

The fun begins the moment you spot their blue and gold Grand Chapiteau (big top) at the Intersection of I-84 and I-91 In Hartford. It seats 2200.

As you push the canvas flaps aside to enter, you notice the subtle smell of grass and hear a cacophony of insects all around you. Scientists in beekeeper-style helmets with nets and specimen boxes patrol the audience, on the trail of insects. A few unfortunate latecomers are examined, magnifying glasses are employed, and Grotowski-esque mutterings and grunts fill the air. The show has no script, but uses a wide variety of the Polish theatre director Jerzy Grotowski's techniques to communicate their surprise, happiness etc. Once in a while you can even make out the word "ovo" or "no" but Cirque's shows are created for multi-lingual audiences. They travel the world. 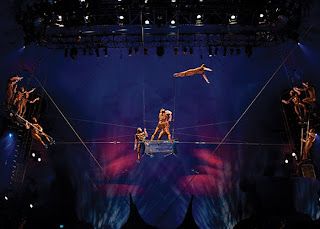 The scarabs operate at the top of the tent.
As this is happening, insects are slowly hopping, crawling, slithering and otherwise finding their way on stage. Someone is lugging a human sized egg through the audience. On stage is a gigantic egg, perhaps 60 feet wide, dominating everything. In the background is an organic structure reaching from floor to ceiling. Two pods of four musicians each begin playing a samba with tango overtones. All this, and then the show actually begins.

The audience becomes aware that they have shrunk in size and importance and entered a different world. OvO offers a headlong rush into the insects colorful ecosystem. On stage we watch as the creepy-crawlies work, eat, flutter, play, fight and look for love in a non-stop dance of endless energy. Giant flowers open and their scent fills the air. The insects’ home is a world of biodiversity and beauty alternately filled with noisy action and moments of quiet emotion. 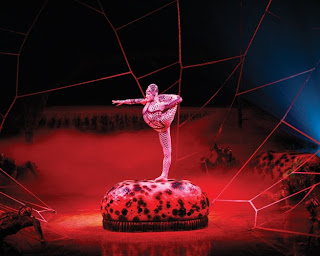 The contortionist made the audience gasp at her impossible combinations.
But all this is simply the lavish frosting to introduce the circus acts, albeit using every dance and theatre trick imaginable. Just as Julie Taymor created a special world for the animals of The Lion King so do Deborah Colker and Chantel Tremblay create an imaginary world for the insects. OvO's costumes are not precise depictions of what a cricket or ant looks like, but an interpretation. None of the proceedings will upset someone who might get squeamish at the site of a spider, ant or cockroach. Instead it's like being twelve years old again, looking to see what's hiding under the rocks in the back yard.

With 54 performers from 16 countries, there are a lot of insects. For example, five yellow and-red ﬂeas ﬂing themselves through the air and come together in graceful, perfectly balanced sculptural formations. A Dragonfly performs a graceful balancing act. A spider defies gravity and physics on the slack wire earning gasps and applause from the onlookers.

Perhaps the most stunning performance was that of the "scarabs" who operate from perches high above the audience . It is an act that combines several traditional circus skills like banquine, Russian swing and swinging chair. These fly boys leap from the edges of two platforms in the rafters to the catchers positioned on a third. Their physical setup is the largest ever created under a big tent, and requires some 16 people just to set up. They do it in minutes as other action was taking place on the stage. 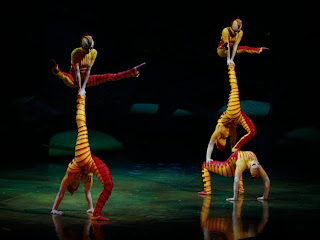 The fleas cling to each other as they jump about.
The penultimate act was the 25' high Cricket Wall, which has 20 artists running, jumping and walking across its jagged face. Using trampolines and power tracks - plus pure physical strength and teamwork - they leap, jump and spring to the top. The effect is so stunning that the audience can not believe what it is seeing. But there are no hidden wires, nothing but the artists and the setup. A similar effect is used at the close of La Nouba, a permanent Cirque show in Orlando. It is an acrobatic achievement like no other.

Cirque's productions have become so elaborate and intricate that they are becoming more grandiose than Grand Opera. Like that art form, they combine spectacle, theatre and music into a whole new experience. The gold and crystal of the venerable Metropolitan Opera House is even challenged by the KA theatre Cirque created at the MGM Grand in Las Vegas. Instead of monied gilt, that theatre's interior resembles the heart of a giant space ship with a hydraulic stage that arises from the deep.

Everything about this show is amazing, scenery, costumes and makeup included. The costumes for OvO are not only intricate, they are sufficiently detailed to allow close-up scrutiny. (They offered, I accepted.) But what makes them special is they are also truly durable. They are able to take the punishment these circus acts inflict on them. Liz Vandal, who created them, is known for her futuristic superhero costumes, and for recreating suits of armor from all eras. There is little doubt that is why they have such beauty and durability.

In OvO, it is the lighting and sound people who create the magical environment that surrounds the audience. There are four enormous lighting toweres and the same number of giant subwoofers strategically placed under the seating. 100 surround speakers are placed around the arena to immerse the audience in a wall of sound. The effect is stunning. You can feel the action at several points in the evening. And subtle. The chirping and chattering never stops, yet becomes a soundstage on which everything else is overlaid.

OvO, like most Cirque shows, is designed to please all ages and all levels of sophistication. As someone who has seen ten of their 25 shows, the question is when they will begin repeating themselves. Yes,, there are certain elements that appear in all their shows, which might be dismissed as just a bunch of dressed up circus acts.
But like a good meal, where we use the same ingredients over and over, Cirque always creates totally new and different menus to excite our taste buds. This is a company that totally reinvents themselves again and again. Any Cirque du Soleil show makes for a great way to spend an evening. But this is one you should see early. And often. 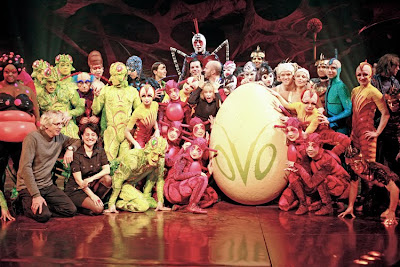 This is only two-thirds of Ovo's huge cast!

Cirque du Soleil's OvO opens in Hartford June 17 and runs through July 11. It then moves on to Boston from July 22 to August 15 and Washington, DC from September 9 to October 3.

A slightly different version of this review appeared earlier in Berkshire Fine Arts.
Posted by Larry Murray at 11:06 AM