"Carnival" at Goodspeed Musicals has Acrobats, Jugglers, Puppets and Magicians 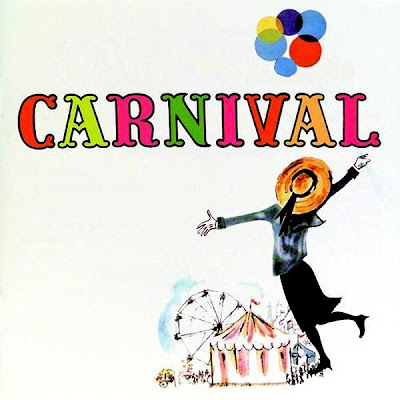 The original cast album design for Carnival.
Carnival is one of those classic book musicals that tells a heartbreaking love story surrounded by the color and vibrancy of a traveling troupe of artists. With a gorgeous score by the almost forgotten Bob Merrill, it is a musical I actually saw on Broadway with Anna Maria Alberghetti in the lead role of Lili, a young innocent.

Scheduled to run from July 9 – Sept 18 at the Goodspeed Opera House in East Haddam, Conn. This production will officially open on August 4, 2010. The last time I saw this musical was at the Berkshire Theatre Festival in 1979 or so. It's been a long time waiting for a top notch production, which the Goodspeed name always promises. 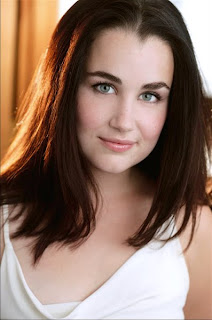 Lauren Worsham
The magical and heart-warming tale of a naïve young woman who eagerly joins a traveling circus. Surrounded by a riot of acrobats and jugglers, music makers and clowns, she is dazzled at first by the troupe’s manipulative magician. In the end she finds happiness with a disillusioned puppeteer who can only express himself through his delightful puppets. Based on the film Lili and with songs like “Love Makes the World Go Round” and "Her Face," Carnival! casts a romantic spell over the entire audience.

In addition to the Music and Lyrics by Bob Merrill Carnival's book is by Michael Stewart, based on Material by Helen Deutsch with Revisions by Francine Pascal.

Now to the cast. Lili will be played by Lauren Worsham whose gorgeous voice I heard up at the Weston, VT Playhouse two summers ago in Adam Guettel's Light in the Piazza. She broke my heart with her acting. 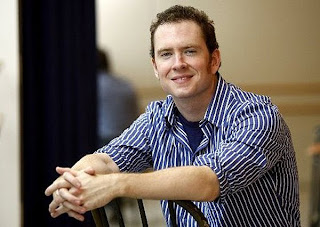 Adam Monley
Paul will be played by Adam Monley who appeared on Broadway in Mamma Mia! . Mr. Monley played Dominque in The Norma Terris production of The Baker’s Wife.

Marco will be played by Mike McGowan whose Broadway credits include Ragtime, Grease, The Apple Tree and The Producers. Mr. McGowan previously performed in Goodspeed’s 2001 production of They All Laughed.

Rosalie will be played by Michelle Blakely who performed the Broadway revivals of Annie Get Your Gun and Grease. Jacquot will be played by Nathan Klau. Schlegel will be played by Laurent Giroux whose Broadway credits include The Mystery of Edwin Drood, Dancin’ and Pippin. Mr. Giroux returns to Goodspeed where previously he played M. le Marquis in The Baker’s Wife. 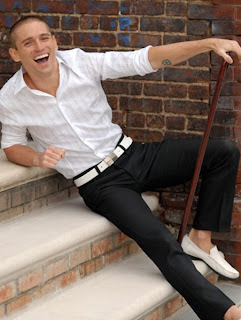 Joshua Dean
The ensemble will include Joshua Dean and Ben Franklin, co-founders for New York based aerial theatre company Suspended Cirque. Mr. Dean has performed around the world as a ballet, modern, and musical theater dancer. Mr. Franklin has performed all over the world as an actor/singer/dancer. He has worked in numerous regional theatres, national tours, world cruises, Off-Broadway, and Lincoln Center.

Price Waldman from Broadway’s The Little Mermaid and Dr. Seuss’ How the Grinch Stole Christmas! joins the ensemble. Mr. Waldman returns to Goodspeed where he previously performed in Sweeney Todd and Amour.

Other members of the ensemble include Timothy Hughes, Kara Kimmer (Goodspeed’s A Funny Thing Happened on the Way to the Forum), Robin Masella, Clifton Samuels, Amy Shure, Justin Urso and Dana Winkle (Goodspeed’s Pippin and Mack & Mabel). The swings will be Miguel Edson and Melissa Steadman.

Lighting design will be by John Lasiter whose designs for Goodspeed Musicals include Annie Get Your Gun, Camelot, Big River and 1776. His off-Broadway credits include The Seagull, Common Vision, and Make Me A Song.

Puppet designer for Carnival! will be Robert Smythe. Mr. Smythe is considered one of the foremost puppet artists in the United States. As the founder and Artistic Director of Mum Puppettheatre, the only regional theater in the United States devoted to puppetry, he wrote, directed and performed over 20 original productions using puppets, masks and human actors.

The Music Director for Carnival! will be Michael O’Flaherty. He is in his 19th season as Goodspeed’s Resident Music Director. F. Wade Russo will be Assistant Music Director. Orchestrations will be provided by Dan DeLange, who provided the orchestrations for Goodspeed Musicals’ Annie Get Your Gun, Camelot, 42nd Street, Half a Sixpence, High Button Shoes, Singin’ in the Rain, The Boy Friend, Red Hot and Blue, Call Me Madam, and Babes in Arms. Carnival! is produced for Goodspeed Musicals by Michael P. Price.

From Bob Merrill's family - thanks for this post!
http://www.TheBobMerrill.com/