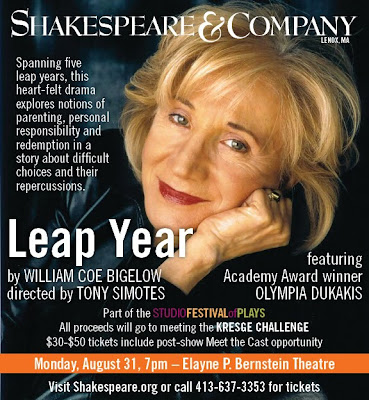 Shakespeare & Company welcomes back Academy Award-winning actress Olympia Dukakis for a special benefit performance of William Coe Bigelow’s moving drama Leap Year. You can read the story behind this reunion in my revealing interview in Berkshire Fine Arts. This one-time event lights up the Elayne P. Bernstein Theatre on Monday, August 31 at 7:00pm, followed by a reception with the cast. Artistic Director Tony Simotes directs. Leap Year kicks off S&Co.'s 15th annual Studio Festival of Plays, which hits full stride with seven staged readings of new works at the Bernstein Theatre on Monday, September 7.

Leap Year tells the story of a thirtysomething couple, Rob and Lisa Montgomery, whose second child is born with Down’s Syndrome. The first act takes place in a duplex apartment in Los Angeles, starting the day their son is born, on February 29th, 1988—as the couple, their friends, and family struggle to come to terms with the painful event and the difficult choices they suddenly face. The second act transpires five leap years later, on February 29th, 2008, in the same duplex apartment, when the decisions the Montgomerys have made with regard to their son’s upbringing play out in stark terms. This captivating drama goes straight to the gut; at its center are questions about personal responsibility, parenting, a personal sense of God, and finally, the redemptive quality of love and forgiveness. 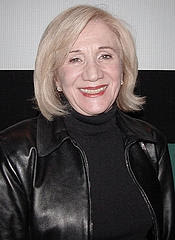 Olympia Dukakis, to appear at Shakespeare & Company
Reflecting on her return to Lenox, Dukakus said:

"I'm delighted to be working again at Shakespeare & Company, especially under the direction of the extraordinary Tony Simotes, my old friend and one-time student. This is a place where we can explore the deep resonances of Shakespeare's work, as well as the most thought-provoking voices of our own day. There is no better place to bring William Bigelow's exciting new play—and to be helping Shakespeare & Company achieve a Kresge Foundation incentive grant makes it all the more special." 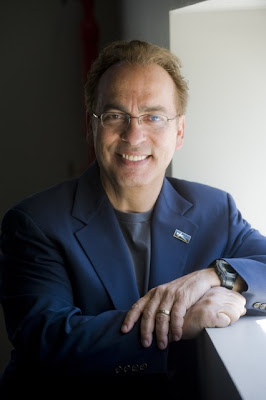 Tony Simotes, Artistic Director of Shakespeare & Comapany
Dukakis’ roots with the S&Co. family reach back to the 1970’s, when she was an acting teacher for founding Company members Simotes, Dennis Krausnick and Kevin G. Coleman at New York University. In 1998, her groundbreaking The Lear Project (later expanded into Queen Lear), directed by Krausnick and featuring Dukakis as Lear and Founding Artistic Director Tina Packer as the Fool, sold out its run at S&Co. She has since co-adapted The Other Side of The Island, based on Shakespeare’s The Tempest.

Ticket prices for Leap Year range from $30 to $50, and are available at www.shakespeare.org or from the Box Office, which can be reached at (413) 637-3353. Proceeds will benefit Shakespeare & Company’s ongoing $10 million Capital Campaign and its push to receive an $800,000 incentive grant from The Kresge Foundation. S&Co. has already raised over $8 million toward its total, funds which have gone to the construction of the new Production and Performing Arts Center and Elayne P. Bernstein Theater, plus other much-needed infrastructure improvements and the creation of a small reserve fund. Earlier this year, S&Co. announced receipt of a highly competitive incentive grant from The Kresge Foundation, based on one key condition: once the Company raises an additional $1.2 million in its broad, community-wide appeal, The Kresge Foundation will contribute a stunning $800,000 to successfully complete the Capital Campaign.

The Kresge campaign has gained momentum all summer as patrons, friends and neighbors have come together to support S&Co. and its programming, which has become so interwoven into the community over the Company’s 32 years of groundbreaking performance, transformative education programs, and world class actor training.
Posted by Larry Murray at 3:44 PM