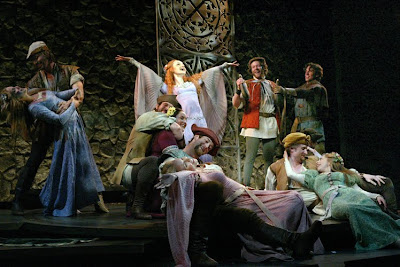 The cast of Camelot celebrates the lusty month of May. Diane Sobolewski photos.

Lerner and Loewe's glorious musical Camelot is more than one brief shining moment on stage, it is an evening of magical musical theatre, a total delight for the senses. At the Goodspeed Opera House in East Haddam, Connecticut the musical has many charms, from the moment of Guenevere's arrival, to the final message of King Arthur about his Knights of the Round Table. Here is a summary of my full review and slide show which appear in Berkshire Fine Arts. 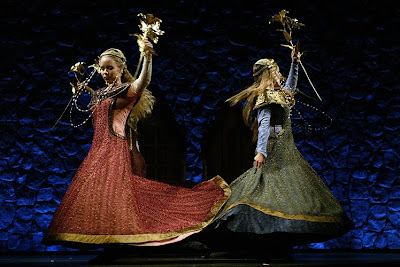 Marissa McGowan and Mollie Vogt-Welch in Goodspeed Musicals CAMELOT. Photo by Diane Sobolewski.
Directed with a sure hand and clear vision by Rob Ruggiero, the musical's book has a reputation as being a bit unwieldy, but someone has done some judicious editing, pruning and possibly even a little rewriting. It's an improvement. The actor-singers are all first rate, and in a last minute substitution, I was fortunate to have been able to see the incredible Marissa McGowan in the role of Guenevere, rather than Erin Davie. McGowan blew me away, and was very faithful to the role as I remember it from the first production which I saw in 1960 at the Colonial Theatre In Boston. That starred Julie Andrews, Richard Burton, Robert Goulet and Roddy McDowell. 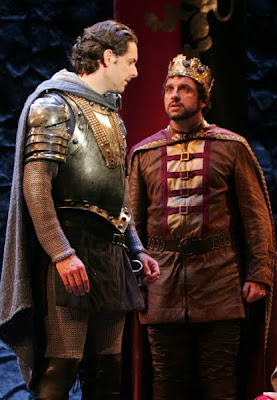 Loyalties are tested between Lancelot (Maxime de Toledo) and King Arthur (Bradley Dean) in Camelot at the Goodspeed. Photo by Diane Sobolewski

Of course, comparisons are inevitable, even almost half a century later. So here goes. McGowan was every bit as good as Julie Andrews. Their voices are similar. When I closed my eyes, Bradley Dean seemed to be channeling Richard Burton and made an equally impressive King Arthur. However, Maxime de Toledo as Lancelot didn't remind me of Robert Goulet at all. He is much taller, louder and, well, cavalier. He exudes self assurance while Goulet was more vulnerable. Adam Shonkwiler as Mordrid made his character downright sinister, while Roddy McDowell only played himself. He never did have much range. 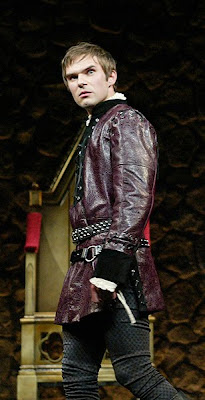 As Mordred, Adam Shonkwiler's Seven Deadly Virtues tickles wickedly in Goodspeed's CAMELOT. Photo by Diane Sobolewski.
In you take in a performance, you will likely notice the incredible sound the small pit band of just eight pieces creates using new arrangements by Dan DeLange. His choice of instrumentation is as much a work of genius as the music of Lerner and Loewe. 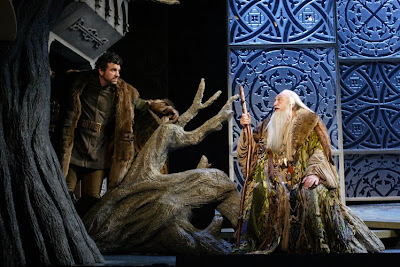 King Arthur (Bradlley Dean) and Merlyn (Herman Peters) begin the quest for right in Camelot at the Goodspeed. Photo by Diane Sobolewski

A short rant: Watching and listening to the video below will help you understand why I felt disappointed this summer at Barrington Stage's otherwise delightful Carousel and Berkshire Theatre Festival's well done Candide. Both companies substituted twin pianos for the usual pit bands in their productions. Even with twenty fingers, the sound is thin. But even that disappointment pales in comparison to those oozy second-rate, phony synthesizers gumming up things at the Mac Hayden Theater in nearby New York State. They are an insult to the composers whose creations are the heart and soul of the form. Musicals should be, must be, musical, not some bargain basement knockoff.

With Tanglewood so near, and music lovers flocking to the area, serving up second rate music in these productions will eventually backfire. Local theater companies cut budgets this year in response to economic realities, but don't be surprised if we see reputations and audiences decline as a result. I am not the only one who has felt cheated of the full experience one is supposed to get at a musical. Thank goodness for the new arrangements the Colonial Theatre has made with C-R Productions and the Cohoes Music Hall. Their production of The Producers last June provided a pit band, the only one in the long Summer Theater Season in the Berkshires.

The video was produced by the Goodspeed prior to opening night.

The trip to East Hadam took 2.5 hours from North Adams, and can be cut to 1.5 hours from south county. It is well worth the trip. If the weather is pleasant, you might want to take a picnic supper. The Goodspeed has set up picnic tables along the banks of the Connecticut River where they are located, and it makes for a nice break after the drive, and before the theatre. 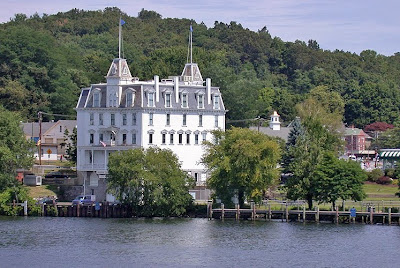 The Goodspeed Opera House is on the Connecticut River with adjacent picnic grounds.
For more information and tickets, visit Goodspeed Musicals for details. You can also call the Box Office at 860.873.8668. Be sure to plan ahead. The wonderful old Victorian theater on the third floor of the landmarked building only has 398 seats which often sell out to the locals. There is an elevator. Don't miss the mini patio for drinks and a splendid view of the river.
Posted by Larry Murray at 12:14 PM