I Am My Own Wife, the story of Charlotte von Mahlsdorf 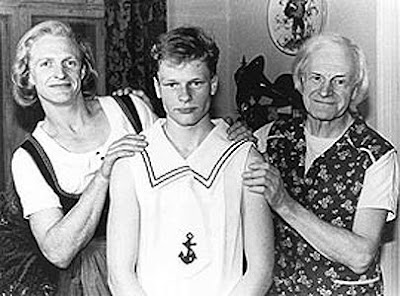 Promo image from the movie "I Am My Own Woman" which tells the story of Charlotte von Mahlsdorf as a young man (center), a young woman (left) and Charlotte herself in her later years. 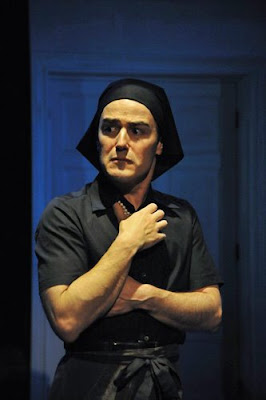 Vince Gatton as Charlotte von Mahlsdorf in "I Am My Own Wife" at Barrington Stage Company through June 8.

The Barrington Stage Company under Julianne Boyd has been taking a lot of risks in recent years, starting with their move to Pittsfield from Great Barrington. Happily most of their regular audiences took the change in stride. They too benefit from a wonderful new theatre and larger base of fellow theater-goers. The company is no longer just a summer operation, it presents plays almost year round.

So it was only a small surprise when they announced they were doing the Doug Wright Tony and Pulitzer winning I Am My Own Wife with the incredibly talented Vince Gatton playing the three dozen or so roles in this one man play.

At Berkshire Fine Arts, Charles Giuliano did the lead review, and declared it more powerful and absorbing than the original Broadway production:

Charles and I decided this play deserved more attention than just a single review, and so I undertook to write a second story, detailing the conflicts and debates that still rage about Charlotte von Mahlsdorf. She was the one and only transvestite to reign in Berlin during the Communist era.

In my research on Charlotte, I read numerous other takes on her life. The best of the lot was in a review of her film, I Am My Own Woman, found at Planet Out. Its details were a little too frank for inclusion in my own article in Berkshire Fine Arts.

Now a 60-something lady who loves to don Victorian lingerie and display her ever-youthful butt, Charlotte speaks fondly of her mostly deceased ex-lovers. She's always had a penchant for older men, and time has outrun most of them.

There was a time, after the Wall went up, when gay East Berliners were barred from meeting one another in public; gay bars were closed and gays were prohibited from placing "contact ads" in newspapers or magazines. That's when Charlotte met one of her great loves in response to a number scrawled on the wall of a public latrine.

Her story seemed to both absorb and mystify many in the Berkshires audience who listened in polite, presumably stunned, silence. There is wonderful humor in the production, but not many in the opening night audience laughed. So I quietly chuckled as the bon mots were delivered by Gatton.

In my treatment, I decided that Charlotte was not only his own wife, but her own husband as well. You can read why I came to that conclusion here:

Larry Murray on Charlotte von Mahlsdorf in Berkshire Fine Arts
Posted by Larry Murray at 9:11 AM