The Power of Pinter at Berkshire Theatre Festival 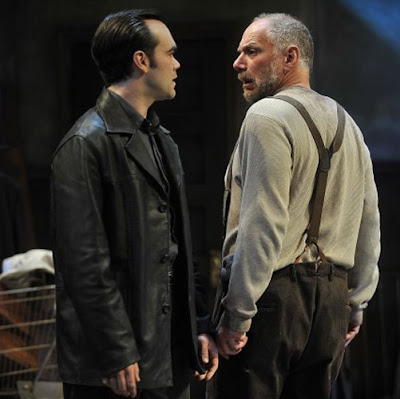 James Barry as Mick (l) and Jonathan Epstein as Davies in The Caretaker opening the Berkshire Theatre Festival season.

When I walked into the Berkshire Theatre Festival's Unicorn Theatre last Sunday afternoon, I gave up the glorious Berkshire sunshine and lush carpet of green for the grey and dingy squalor of a London flat. In creating the set for their season opener, The Caretaker, scenic designer Jonathan Wentz has done such a convincing job of hopeless chaos, I wanted to escape back to the flowers of Spring, and the hope of renewal that was just beyond the theater walls.

Pinter is hard. If you take his work seriously, you have to surrender your own comfort level and exchange places with his sodden characters who have so little to live for. As the press release states so cooly:

Nobel Prize-winning playwright Harold Pinter’s The Caretaker is an enigmatic and sinister comedy about the struggle for power. The fragile relationship of two brothers, Aston and Mick, is turned upside down when Davies, a homeless man, enters their lives. Since its premiere in 1960, this play has been recognized as a landmark in 20th century drama.

Director Eric Hill comments: “I’m excited to examine the dramatic tension and mystery of Pinter – always a study in trying to get behind the words and underlying causes of the relationships.”

I think this play was a triumph as I wrote in my review in Berkshire Fine Arts, but it is also depressing. Honest examination of the human condition is rarely upliftiing, at least in Pinterland.

Larry Murray's review of "The Caretaker" in Berkshire Fine Arts

Just don't see it on a glorious spring day, save it for a cloudy or rainy one. Pinter is brilliant, this production is absorbing, but it is also deeply affecting.
Posted by Larry Murray at 9:56 AM