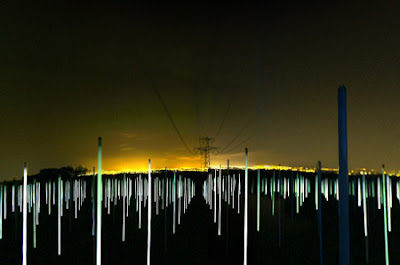 He has planted 831 florescent bulbs in a field under some power lines, and they are illuminated solely by the electrical field the high voltage lines generate. His website details his life and art. He also has a DVD that documents the whole thing. 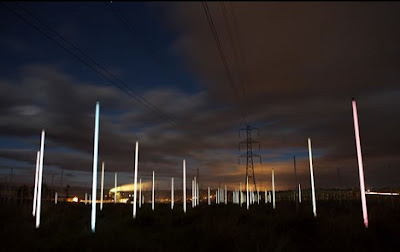 The 1301 fluorescent tubes are powered only by the electric fields generated by overhead powerlines. Richard Box, artist-in-residence at Bristol University’s physics department, got the idea for the installation after a chance conversation with a friend. ‘He was telling me he used to play with a fluorescent tube under the pylons by his house,’ says Box. ‘He said it lit up like a light sabre.’ Box decided to see if he could fill a field with tubes lit by powerlines. After a few weeks hunting for a site, he found a field, slipped the local farmer £200 and planted 3,600 square metres with tubes collected from hospitals.

A fluorescent tube glows when an electrical voltage is set up across it. The electric field set up inside the tube excites atoms of mercury gas, making them emit ultraviolet light. This invisible light strikes the phosphor coating on the glass tube, making it glow. Because powerlines are typically 400,000 volts, and Earth is at an electrical potential voltage of zero volts, pylons create electric fields between the cables they carry and the ground.

Box denies that he aimed to draw attention to the potential dangers of powerlines, ‘For me, it was just the amazement of taking something that’s invisible and making it visible,’ he says. ‘When it worked, I thought: ‘This is amazing.’’