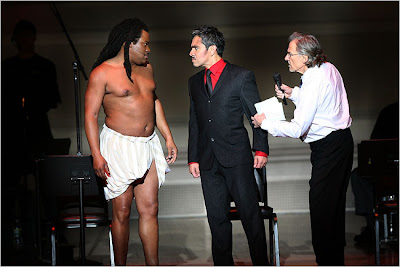 Jesus is portrayed in a diaper debating the Devil, with Springer as referee. 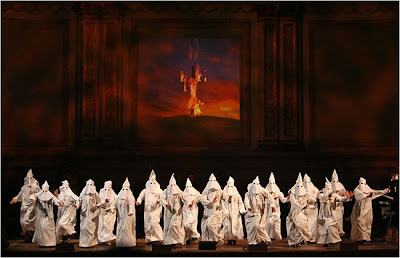 The Ku Klux Klan surprises us, swishing their gowns in an energetic chorus line. 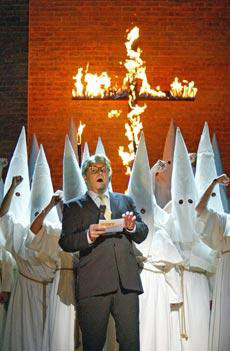 The KKK sings and dances for the JerryCam. 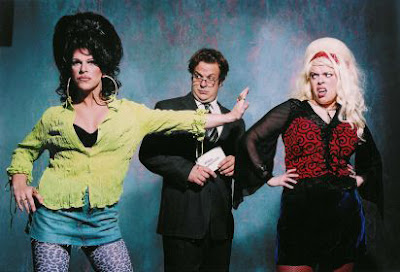 Jerry and guests with big hair go hand in hand. 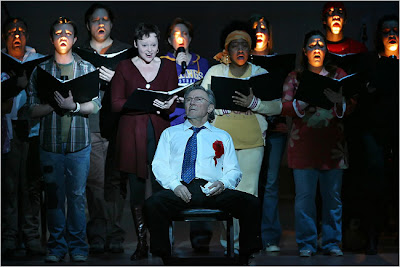 Jerry's chorus is anything but Greek. 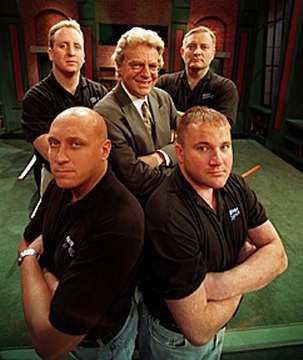 The "real" Jerry has real guards recruited from the Chicago Police Department. 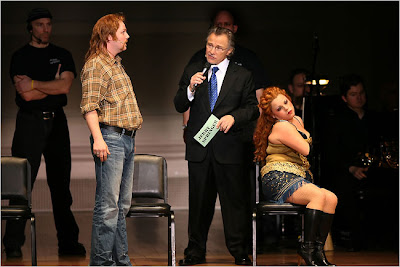 Jerry has strange guests on the Operatic version of his show.

Opera is not a dead art. Far from it. But it has been a long time since a new opera had protesters picketing performances, especially in the less fundamentalist U.K. Because the content of Jerry Springer - The Opera includes the characters of Jesus and the Devil depicted in less than worshipful words and images, it has raised a howl of outrage, one heard even in the USA where its scheduled Broadway run was cancelled due to skittish backers. American audiences, they think, are far too conservative for this.

Perhaps the spectacle of a tap dancing Ku Klux Klan sent a few too many chills down their spine and into their pocketbooks. Yet it seems that this opera has sold out its run wherever it has played. In 2007 several regional companies mounted productions, taking enormous risks with their resources and supporters, but weathering the storm, and in once case, extending the run by a month.

Recently, it played two nights at Carnegie Hall in a production where Harvey Keitel played the non-singing role of Jerry Springer. Of course it was sold out, and received rave notices from the New York Times, which does not compliment new works easily.

Many excerpts of the opera are available on YouTube since the entire production was televised on the BBC. On January 7 2005, the day before the broadcast, the BBC announced that it had received over 47,000 complaints about its plans to screen the opera – the most complaints ever received about a British television broadcast.

Many commentators, including the BBC, attributed such a high volume of complaints to an orchestrated campaign by various Christian groups. Supporters of the BBC's broadcasting of the show pointed out that the supposedly blasphemous content was clearly presented as a fantasy in the mind of the dying central character and was not intended to be a serious comment on Christ or Christian theology. John Beyer, chairman of Mediawatch-UK, argued that the BBC should shoulder much of the blame for the campaign against the opera since they had promoted the opera as "pushing back the boundaries of taste" and "controversial" when it had never been intended to offend the groups who campaigned against it.


In the past year there have been five productions of the opera in the USA. The two concert presentations this week at Carnegie Hall, plus full productions at Chicago's Baliwick Repertory Theatre, Minneapolis Music Theater and Playhouse on the Square in Memphis. The Chicago production ran with extensions, for three months, selling virtually every ticket it could print.

Upcoming are productions in February at Stage West in Des Moines, and in midsummer at Studio Theatre's Secondstage in Washington, D.C., a production I hope to see and report on both here and for the web magazines Maverick Arts and Berkshire Fine Arts. 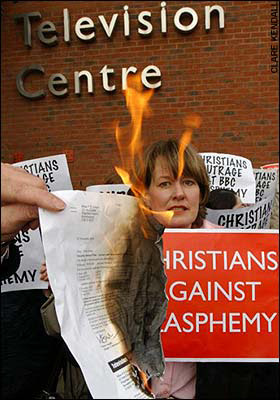 Christians express their distress over the opera's content, ignoring its ultimate moral message.

One of the reasons Christians get upset at the opera is its use of profanity. "It has been accused of including "8,000 obscenities"—it is not known where this count originated, but the 8000 figure is popularly quoted. This however is impossible, as 8000 obscenities over the show's 120 minute runtime would mean that there were 66 obscenities a minute, and thus 1 and a half a second. Several publications, including the Daily Mail and The Sun, claimed a figure of "3,168 mentions of the word fuck and 297 of the word cunt".

As stated in the BBC's findings, however, "the reported figure was in fact a vast exaggeration. In reality, there were 96 uses of "fuck" and nine uses of "cunt". While a substantial number, this was not necessarily unacceptable in terms of late night terrestrial television." The numbers resported were found by multiplying the number of cast members singing a profanity at the same time, ie the reported 297 uses of the word cunt is the result of multiplying the 33 cast members with the genuine amount of uses of the word, ie, nine times.

According to director Stewart Lee, there are 174 swear words in all." From here:

There is a DVD of the opera, though since it was issued in the UK I am not sure if it will play on all US machines. Other than the YouTube excerpts I am not aware of any music excerpts being available. Anyone can use the comments section to add resources, and I will make updates on additional productions through comments as well.

This is a work well worth seeking out, for blessed are the singing, pole-dancing fetishists. As Ben Brantly wrote in the New York Times:

Those who attended “Jerry Springer,” which stars an affectingly disaffected Harvey Keitel in the nonsinging title role, expecting to snigger and hoot were not disappointed. There’s a guaranteed off-the-charts camp quotient in a show that sets the televised confessions of pole-dancing housewives and men with diaper fixations to music that often leans more toward Bach than Broadway.

In terms of sheer audacity, “Jerry Springer” is a helluva lot funnier than, say, “Young Frankenstein.” This is, after all, a work that features numbers with mock-liturgical titles like “Jerry Eleison.” And though I’d love to say that the demonstrators who assembled outside the theater on Tuesday to protest a show that “blasphemes our Lord” would be disarmed if they ever got to see “Jerry Springer,” I can’t.
Posted by Larry Murray at 1:21 PM