Boston's Theatre Scene - Then and Now 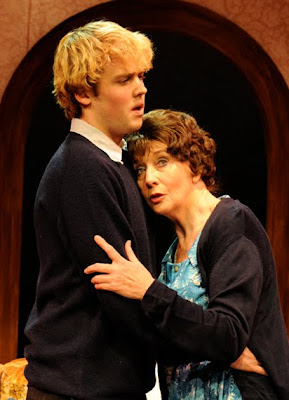 The Publick Theatre's Entertaining Mr. Sloane at the Boston Center for the Arts is wonderful. It stars an all-British cast. Pictured are the great Sandra Shipley with newcomer Jack Cutmore-Scott.
When I arrived in Boston in 1960 after an adolescence in the New York City area, I was shocked to find there wasn't very much in the way of a Boston theatre scene. The Colonial, Shubert and Wilbur Theatres were often lit with pre-Broadway tryouts and national touring companies fresh from Broadway, but the experimental, the daring and the surprising little companies were nowhere to be seen.

For a long time there was just the Charles Playhouse which made a valiant effort, and soon after that the Theatre Company of Boston which provided brief, brilliant flashes of creativity in the midst of an otherwise non-existent theatre community. 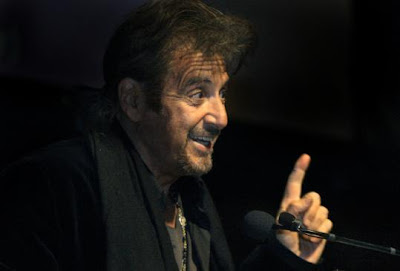 Some of the luminaries were actors like Olympia Dukakis, Paul Benedict and Al Pacino. Because of the scarcity of real theatres, Pacino ended up performing Richard III in the sanctuary of the Church of the Covenant on Newbury Street.

A decade later I would be doing the marketing for the Pocket Mime Theatre in a little candy box of a theatre in the chapel of that same church, at a desk in Pacino's old dressing room. The little mime theatre even enticed Marcel Marceau to attend a performance and had a nice five year run until the fire inspectors discovered it.

They closed it down.

The late 60's and early 70's saw the birth of several additional resident theatres . Smaller companies like Lyric Stage (then on Charles Street) and the Publick Theatre struggled, and amazingly, survived.

But the Boston Repertory Theatre, The Proposition and Boston Shakespeare Company were brief shooting stars that burned out. They made valiant attempts to sink their roots into the cultural soil only to be rebuffed by the cultural elite who shoveled buckets of money to the BSO and MFA. Even the fledgeling Boston Ballet and ICA were treated like foundlings. It was a hardscrabble existence. 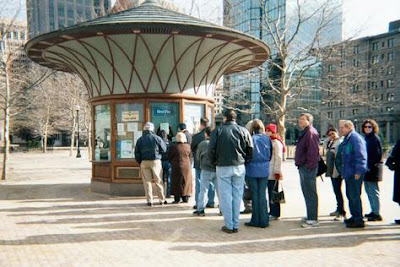 Arts Boston sells tickets in person and increasingly, on line too. Their second Bostix booth, designed by Graham Gund has become as much of a landmark as Copley Square itself.

But from this hardy bunch of pioneers grew Boston's first theatre league, which over time morphed into StageSource. Arts Service Organizations began to emerge, to help develop the management and financial expertise that artists needed. The Artists Foundation, Massachusetts Cultural Alliance are long gone, but Arts Boston remains. Perhaps that organization - which I ultimately headed for a decade in the 80's - knew that the most important thing for an artist is an audience. And the money ticket buyers bring. It's director, Catherine Peterson continues the Sisyphean task of finding warm paying bodies to fill otherwise cold, empty seats.

Soon Boston's two major colleges established the American Repertory Theatre at Harvard and the Huntington Theatre at BU. ART formed a resident company of actors who stayed with Robert Brustein (artistic director) for decades. Eventually he left and the brilliant Diane Paulus prefers rotating casts to fill the roles as needed. Meanwhile, Peter Altman played it safe at the Huntington, which mostly cast its productions from the New York pool of actors. His successors have drawn from both Boston and New York auditions. 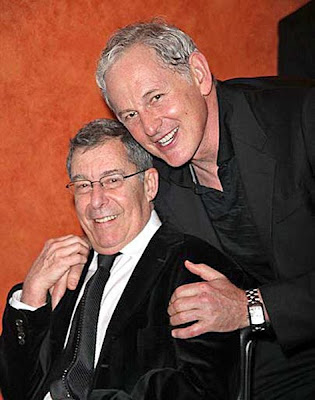 Nicholas Martin was the Huntington Company's gift to Williamstown Theatre Festival. Here he is seen with actor Victor Garber.
Today there is a deep and significant reservoir of top talent which lives and works in Boston, although who can say "no" to an offer to go to Broadway, or even off-Broadway. Indeed, many of the ART and Huntington shows, especially under NIcholas Martin, made the transistion to New York. Martin left the Huntington and currently is planning the Williamstown Theatre Festival's summer season.

To my way of thinking, quite a few of what we used to call Boston's small theatres have grown to become mid-sized ones, with million dollar budgets to match. Foremost among them is Lyric Stage which, under the guidance of Spiro Veloudos, has cannily chosen shows with wide appeal and interest and kept its prices affordable. As my interview with him a year ago revealed, he is both creative and cautious. 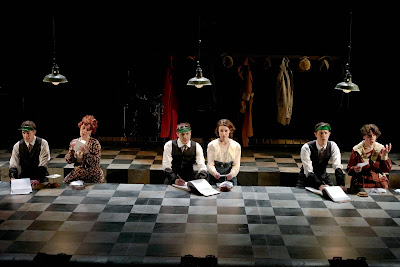 The Adding Machine: The Musical from Speakeasy Stage is riveting.

On a recent trip to Boston I had the pleasure of seeing the latest work of the Publick Theatre, Entertaining Mr. Sloane (Review here), and the New England premiere of The Adding Machine: A Musical (Review here) at Speakeasy Stage Company. The quality of the productions was uniformly excellent, a testament to the growing strength of both these companies and our local talent pool.

Lyric Stage opens Lady Day at Emerson's Bar and Grill March 26, and closes its season with Blithe Spirit starting May 7.

Other companies that have continued to impress are the New Rep which opens Opus on March 28 and will follow with The Hot Mikado beginning May 2.

The Nora Theatre Company opens From Orchids to Octopi on March 31.

Zeitgeist Stage Company has their final production of the season, Farragut North slated to open on April 30 . 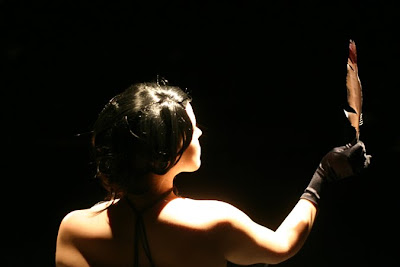 Le Cabaret Grimm from The Performance Lab.
And even as these companies continue to grow and develop their own theatrical locovore following, new companies are born with startling frequency. Among the most interesting of the new crop is The Performance LAB, an experimental theatre company. It will present the world premier of Le Cabaret Grimm, a punk-cabaret musical April 8-24 at the Boston Center for the Arts. The show is written and directed by Artistic Director Jason Slavick, with original music by Cassandra Marsh and choreography by Michelle Chasse. It will be their first show.

What is unusual is that it seems to be hip to the newest trends of younger audiences to mix their media. Slavick promises "a wickedly ironic sensibility" in a show that incorporates Cabaret, Steam Punk, Burlesque and old fashioned theatricality. The music reflects such influences as Tom Waits, Ska, R&B and the Dresden Dolls. “We’re using these fun, contemporary styles to draw in the audience” says Slavick, “but we’re combining them with classic tales that have a universal quality and resonate deeply.”
Posted by Larry Murray at 3:05 PM