Measure for Measure at Lunchtime at Shakespeare & Company

(l to r) Ross Bennett Hurwitz and Tom O'Keefe; Poornima Kirby; Nathan Wolfe Coleman. Danny Kurtz photos.
Lunchtime Shakespeare is being revived. It's an old tradition from Shakespeare & Company's days at The Mount; a midday combo of a substantial boxed lunch and a frothy bite of The Bard. Measure for Measure, is a tilt-o-wheel ride of political hypocrisy and ethical dilemmas, is brought to life on the Elayne P. Bernstein Theatre stage by the energetic and talented troupe of young actors who are in S&Co.’s Performance Internship Program. Associate Director of Training Dave Demke directs.

First performed in 1604 and listed among Shakespeare’s comedies, Measure for Measure is as timely and relevant today as the latest disgraced politician or tabloid scandal. This lively but clear-headed play is a masterful mosaic of comedy and tragedy, intellectual debate and heart-felt passion. A searing indictment of corrupt politicians and moral hypocrisy, it is a play about balance—or rather, the consequences of imbalance when a powerful officeholder strictly enforces the nation’s morality laws, while hypocritically ignoring them in private practice. (Sound familiar?) Measure for Measure is a play that falls somewhere between comedy and tragedy, with grave issues of moral consequence interspersed with the exploits of characters like Lucio (a flamboyant gentleman), Pompey (a bawdy barkeep), and Mistress Overdone (the proprietress of a brothel).

“The thing I’ve been fascinated with is the way the play will swing from tragedy to comedy, literally within a scene. That swing of highs and lows is what I’m finding very compelling, as it has to do with forward motion. Once the train leaves the station, you can’t turn it around and you can’t stop it, ” Demke says, before choosing an alternative metaphor. “It’s something of a rollercoaster ride.” 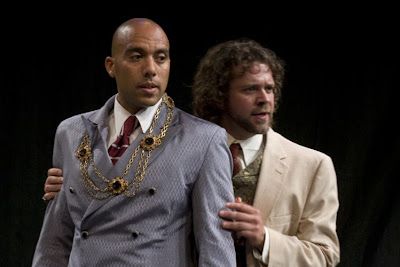 Gabriel Portuondo and Tom O'Keefe
In Measure for Measure, a benevolent Duke has left Vienna temporarily in the hands of the harsh—and hypocritical—Angelo. Angelo rules by the letter of the law, even when it seems justice would be best served by a looser interpretation. Isabella, a young nun, learns that her brother Claudio has received a death sentence for out-of-wedlock practices, Angelo makes an indecent proposal to her, promising to save her brother’s life if she complies. The original “bed trick” is performed, to fool Angelo into thinking his bargain was accepted, while a “head trick” falsely convinces him Claudio is dead. Meanwhile, The Duke has not left Vienna but in fact has remained behind, in disguise, to witness Angelo’s rule. Will The Duke restore order to this tangle of illicit relationships, willful confusion, and misrule in the name of “law and order”?

Measure for Measure plays from July 10 to September 5, with all curtain times at 12:45pm. Tickets run $14 to $18 for Previews, and $16 to $24 performances on or after July 18. Patrons are invited to purchase specially prepared lunches and enjoy them on the terrace overlooking the Dottie and Stephen Weber Wetlands Garden or in the comfortable Bernstein Theatre Lobby. Boxed lunches (tuna salad, turkey, or veggie sandwich; apple; cookie; bottled water) should be ordered in advance from the Box Office for $7. Lunches are provided by S&Co.’s resident chef, Peter Mathis of Bountiful Harvest Catering in Pittsfield (413-281-7345). Lunches are available for pick-up in the Bernstein Lobby at noon.

The Bernstein is air-conditioned and wheelchair accessible. For a complete listing of productions and schedules, to inquire about the 40% Berkshire Resident Discount, Youth Rush tickets, or other discounts, or to receive a brochure, you can call the Box Office at (413) 637-3353 or visit www.shakespeare.org.
Posted by Larry Murray at 2:18 PM