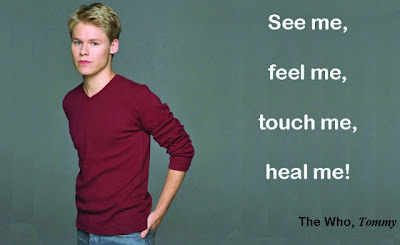 As the season announcement of the newly merged Colonial Theatre-Berkshire Theatre Festival began, the schedule of events was handed out to reporters, most of whom were seeing it for the first time. When Kate Maguire opened the floor to questions, the first show to draw questions was the complex and wildly popular rock opera Tommy by Peter Townshend and The Who. Undertaking a rock opera in the Berkshires is rare, especially this one. The Who’s Tommy was first released as a concept album in 1969, and then given the full Broadway treatment in 1993. It toured the country for a decade afterwards.

In 2011 the Berkshires will be one of the few places in the world where it can be seen in a fully staged production from the Berkshire Theatre Festival on the stage of the Colonial Theatre in Pittsfield, MA. Previews begin July 7, with the opening set for July 9 and the final performance on July 16. 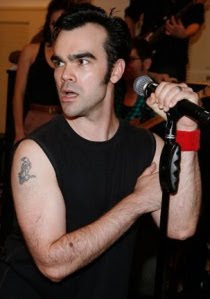 Actor James Barry seen here in "Bloody, Bloody, Andrew Jackson."
Tommy is a powerful totem from an earlier age, its music and message still able to reduce an audience to tears, or make them cringe during its unfolding, and then raise the crowd to their feet with cheers as it ends.But the cheers and tears do not come automatically. Eric Hill who will direct the Berkshire Theatre Festival production has signed on for what could be his greatest challenge ever. Even with a long history of complex undertakings behind him, Hill has his work cut out for him. Tommy is as much about the music as it is the story. And it never stops moving. This is one musical that has to be done “right” to work, with split second timing, relentless energy…so difficult in fact that few theatre companies have undertaken it in recent years. It’s real risky.

Tommy not only requires perfection in its musical elements (to gloss over them is to risk disaster), but the acting can not take a back seat for even one moment. For that, much of the weight falls on the person who plays the title role, and the actors who play his younger self. Finally the production itself is Dickensonian in its scope, for this is one sweeping, epic tale. Those who were born after its earlier incarnations have quite a theatrical tsunami to look forward to.

The casting is exciting. It includes both Randy Harrison who will play Tommy, and James Barry as Captain Walker. James Barry is fresh from the cast of Bloody, Bloody, Andrew Jackson, and has been seen in The Caretaker and The Einstein Project at the Berkshire Theatre Festival.

When the casting was announced,, perhaps the most excited person was the irrepressible Randy Harrison, who said: “I’m very excited to finally sing on a Berkshire stage, and thrilled and honored to be a part of the first Berkshire Theatre Festival production in the gorgeous Colonial Theater.” And being the consummate professional he is, we have no doubt that he is already committing the music and book to memory. 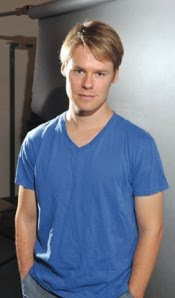 Randy Harrison
While Berkshire audiences know Harrison for his acting abilities in BTF shows like Equus, Waiting for Godot and One Flew Over the Cukoos Nest, he has earned his stripes in musicals as well. He played in Wicked on Broadway, and has extensive musical theatre experience in regional theatre, most notably playing Andy Warhol in Pop! at Yale Rep in 2009.

“Since I’ve started working in the Berkshires and in western Massachusetts, I feel re-connected to the New England area. It’s always felt like home to me. I still have some family there. My aunt is there. But now I think of it like a summer home, which is kind of nice.” – Randy Harrison

Harrison played the youngest member of the cast in the Showtime series Queer as Folk which is still in syndication worldwide. It brought him to the attention of millions of television viewers and could have typecast him as a heartthrob, but after the series finished, he returned to his first love, the stage, and continued to perfect his craft. On the sunny side of 30, Harrison still can play young, and that combined with his deep experience means that we could be in for a Tommy that will sear its music and characters on our memories. You have to see and feel his character for the show to work.

At the moment, Harrison is preparing to open in a new play off Broadway. The Red Bull Theater’s “In the Raw” workshop of Margaret, A Tyger’s Heart, which explores the role of the French Queen throughout Shakespeare’s history plays, begins tomorrow, Feb. 25. Michael Sexton directs the work, which is adapted from Shakespeare’s Richard III and Henry VI. Performances are just this weekend at the Theatre at St. Clement’s. 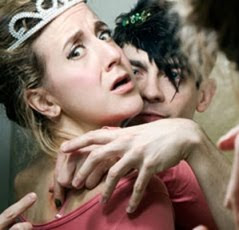 Jenn Harris (l) and Randy Harrison in Jack Ferver's "Swan".
From March 10-12, the actor and his friends will have a little fun at PS 122 as they undertake their spoof of the film Black Swan, complete with unhinged ballerinas, lurid hallucinations, tons of makeup and stage blood with Harrison playing the mad mother, with Jack Ferver as Lily, the hot new bad ballet girl in town. The cast will also include Christian Coulson and Matthew Wilkas. It promises to be catnip for lovers of camp and spoofery. It is a production of the infamous dancer Jack Ferver and his QWAN (Quality Without a Name) Company. “It is going to be insane,” Ferver said modestly.

Harrison maintains a busy schedule in his home base of New York, but uses the Berkshires as his summer retreat, thanks to the Berkshire Theatre Festival.

”I want to do Shakespeare. I want to do Chekov. I want to do Beckett. I did Waiting for Godot in the Berkshires. I think it was just a really, really good production. It was a wonderful director, and a wonderful company and people really responded to what we did. I love the play. I love Beckett. I like what I do now.

But I’ll also do a musical every three or four years. I miss singing after a while, so I’m always happy when the time comes and I’m like, ”I think I want to do a musical.” And also, there are more jobs in musicals and they pay better. [Laughs.] So it’s good when you want to do one.” – Randy Harrison 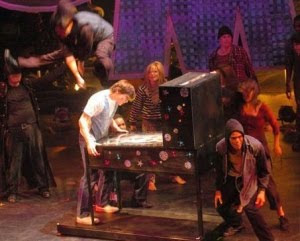 Tommy becomes a Pinball Wizard.
In 1968, Pete Townshend told Rolling Stone he was working on a rock opera about a deaf, dumb, and blind boy. Townshend had rejected psychedelic drugs and discovered mysticism, and wanted to represent different states of consciousness through the story and music. It was only after rock journalist Nic Cohn gave an early version a cool reception that Townshend, knowing Cohn to be a pinball fan, made Tommy a Pinball Wizard. But the plot is much darker than anything you can experience at the local arcade, and varies among the many incarnations of The Who’s eponymous 1969 album. It was played live at Woodstock, and appeared as a ballet, a symphonic recording, a movie, an all-star stage performance, and, in 1993, a Broadway musical.

The original rock opera, The Who’s Tommy is at once a show-stopping rock concert and a cautionary tale of the power and perils of celebrity. We witness Tommy Walker from his birth, through the shocking episodes of his childhood that render him deaf, mute and blind, as he conquers the world with his stardom, and finally after the crowds have turned on him. Featuring legendary songs by the Who, including “Pinball Wizard,” “See Me, Feel Me” and “Tommy, Can You Hear Me?” this promises to be the event of the summer in the Berkshires.

Previews are July 7 and 8 with opening night July 9. It plays until July 16 with tickets priced at $49, 40 and 20. Performances are Monday, Tuesday, Thursday-Saturday at 8pm, Wednesday at 7pm, Thursday and Saturday at 2pm. Subscriptions now, otherwise single tickets for all events go on sale March 14 to the general public. For BTF productions (including Tommy) contact the BTF Box Office at (413) 298-5576 or visit www.berkshiretheatre.org to purchase.
Posted by Larry Murray at 12:08 PM

Nice post. thanks for the shared with us. wordpress parallax designs