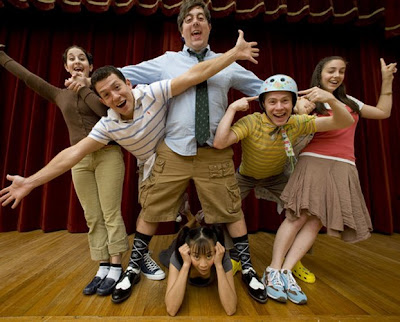 At this time of year, there is extra energy flowing though downtown Pittsfield as the various casts for shows at Barrington Stage Company are deep in intensive rehearsals. Even as I Am My Own Wife starring the incredible Vince Gatton enters its last weekend of shows, (my discussion with him about theatrical craft will appear in Berkshire Fine Arts online next week) two more casts are hard at work. The 25th Annual Putnam County Spelling Bee is already doing run-throughs of their show and The Mysteries of Harris Burdick is getting ready for final rehearsals in the Stage Two space.

But there is another Barrington Stage enterprise underway, and while it requires the same sort of creativity as what goes on stage, it is less likely to get formal applause. Such is the fate of those who work in marketing the arts. Read on. 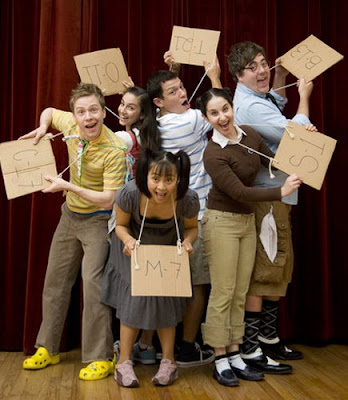 The cast of Spelling Bee

Under the leadership of founder Julianne Boyd, Barrington Stage has long pioneered outreach to the Berkshire community. By that I mean making those who live and work in the Berkshires feel welcome, wanted and entertained at their performances. The Berkshires have always been home to the arts but over the years, some of the residents looked at all that cultural activity as being, well, for "them" and not for "us".

Economics are part of it. Those who labor in the Berkshires year round are often not as well to do as those who make their summer homes here. And even though ticket prices are quite reasonable compared to New York, or even Albany and Boston, for those who think $10 is a lot for a meal, $20-40 a head can be quite a high price to manage.

So Barrington Stage, and a number of other local theater groups innovated Half-Tix, a day of the show operation where you can often get tickets at half their regular prices. The tickets are sold at several locations in the Berkshires, and only in person. You can often find other cultural attractions with special offers as well.

In the Adams Visitors’ Center, 3 Hoosac Street, Adams, MA
At the Southern Berkshire Chamber of Commerce Booth, 362 Main Street, Great Barrington, MA
And at the Pittsfield Visitors’ Center, located in the Colonial Theatre Annex at 111A South Street in Pittsfield, MA

The tickets are first come, first served, and limited in number. 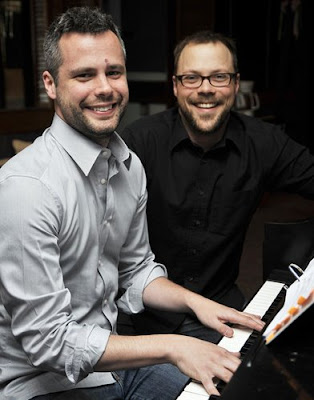 Working on the music for Mystery of Harris Burdick

Another innovation which gets its debut on Friday, June 13, is as much social as saving money on ticket prices. Carolann Patterson, marketing director for Barrington Stage calls it " Pay What You Can Nights for 35 and Unders" which says exactly what it is. You can pay as little as $5.00 (hopefully more) if you are under 35 and want to see Spelling Bee, which is the first show to be offered.

The "more" is the best part - it is the party afterwards that is open to the thirty-somethings, and twenty-one plus somethings who saw the show. BSC has teamed up with other Pittsfield organizations in this new initiative. The Pittsfield Garden Tour will follow design director Geri Jones of Churchill Gardens and convert the adjacent alleyway in to an enchanted evening garden for the MainStage after-theatre parties. John Kelly of Kelly’s Package Store, Inc will provide the party drinks (red and white wine and beer) and Paul Rich & Sons will contribute garden furniture, while Larry Kratka will spin the tunes.

The special pay-as-you-can performances and their parties that follow happen on these Fridays:

Plan to attend, and who knows, you could end up dancing with a cast member!

If you are 21 to 35, this may be one of the most enjoyable and best priced night out acativity of the Berkshire summer. The Barrington Stage Box Office is (413) 236-8888. Barrington Stage Website 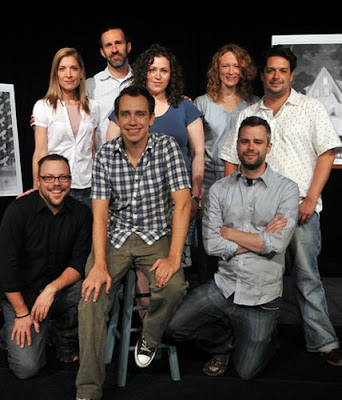 The cast for Harris Burdick

Of course, you don't have to be under 35 to enjoy Barrington Stage and its year round offerings. They welcome those who are older just as warmly.
Posted by Larry Murray at 3:47 AM